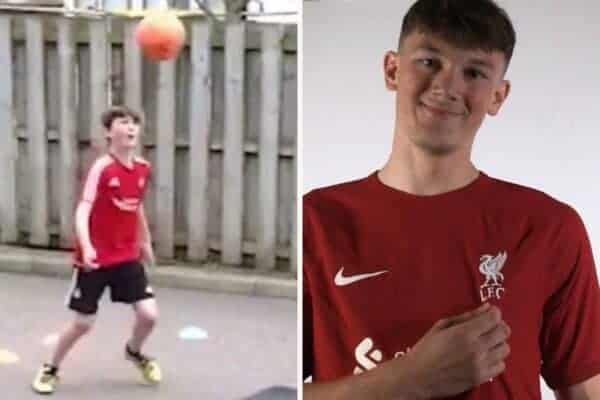 Calvin Ramsay is Liverpool’s latest signing of the summer, and the young right-back has had fans talking on social media after a video surfaced of him showing off his tricks at under-13s level.

The Scot became Liverpool’s third senior signing of the summer over the weekend, following Fabio Carvalho and Darwin Nunez through the doors.

Ramsay is set to take the position as Trent Alexander-Arnold‘s deputy and the teenager himself likened his skill set to that of Liverpool’s No. 66.

“Obviously, I’m a right-back, pretty attacking – I like to attack. I’m OK defensively as well, but my main attribute is attacking,” he told LFCTV.

“[Trent is] similar to the way that I play. His attacking, his crosses, he can use both feet, his passing range is obviously quite similar to mine.”

And as Liverpool fans continue to get to know Ramsay after his move, a video has surfaced of the right-back performing flicks and tricks for the camera whilst with Aberdeen’s U13s.

? Calvin Ramsay back when he was with the Aberdeen U13s! pic.twitter.com/rKVHLBOhQU

We don’t think too many of us were doing that at 13, and to think it was only around five to six years ago for Ramsay, who will turn 19 in July.

And fans enjoyed what they saw, with plenty of cracking reactions:

Lmao… compared to what I looked like at 13 falling over myself running. https://t.co/aTRBtkQ4il

At least we know he can dribble past Harry Maguire… https://t.co/nR1Ntv2TIw pic.twitter.com/qTDfvkRGQl

I like this. A lot. Welcome Calvin Ramsay. https://t.co/DKbYW3njEO

It’s cracking footage of a young teenager aspiring to reach the top, and he’s doing just that only a handful of years later!

Ramsay was not short on confidence in his introduction to Liverpool fans and he is looking forward to show what he is capable of, starting in pre-season in less than 14 days’ time.

“It was a dream come true to play for Aberdeen, and now to be at one of the biggest, if not the biggest, clubs in the world, it’s a massive achievement,” Ramsay said.

“I’m looking forward to trying to show the fans what I’ve got.

“Hopefully I can come in pre-season, show everyone at the club, the staff, the players, what I’ve got, then I’ll see what happens from there.”