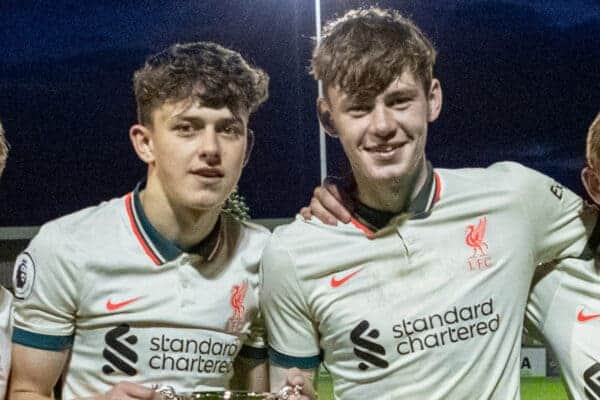 With the arrival of Calvin Ramsay, Liverpool could loan out two of their best young full-backs, with interest ranging from League One to the Premier League.

Liverpool have agreed a deal in the region of £6.5 million for Aberdeen right-back Ramsay, who should undergo a medical this weekend before completing his move next week.

The 18-year-old stands to be the third new arrival to Jurgen Klopp‘s first-team squad this summer, and his signing could have a big impact on the rest of the ranks.

There is a strong chance that Neco Williams leave on a permanent transfer, with the Reds valuing their No. 76 at £15 million amid interest from Nottingham Forest and Fulham.

Meanwhile, right-back Conor Bradley and left-back Owen Beck are both attracting loan interest, following a breakthrough campaign for the pair.

Bradley, 18, and Beck, 19, were first-choice starters and among Liverpool’s top performers at under-23s level, while they were also handed opportunities with the first team, too.

According to the Liverpool Echo‘s Keifer MacDonald, Beck has suitors in the Premier League, Championship and elsewhere in Europe, with a “host of clubs having enquired.”

Meanwhile, Theo Squires for the same publication brings news of talks with League One outfit Bolton over a temporary deal for Bradley.

“A deal has not yet been agreed for the Northern Ireland international but Reds bosses are considering it,” Squires writes, “with a switch to the northwest side deemed to make a lot of sense and discussions currently ongoing.”

Liverpool would seek assurances of regular game time before sanctioning deals for the highly rated pair, but it would seem logical to loan them out if possible.

Though Beck is a hugely talented left-back, he currently has Andy Robertson and Kostas Tsimikas ahead of him in the senior side, while Bradley potentially finds himself behind Ramsay along with Trent Alexander-Arnold and Joe Gomez.

Klopp also has the option of fielding James Milner at either left-back and right-back in an emergency, which would not be the ideal situation for either youngster as they require consistent minutes.