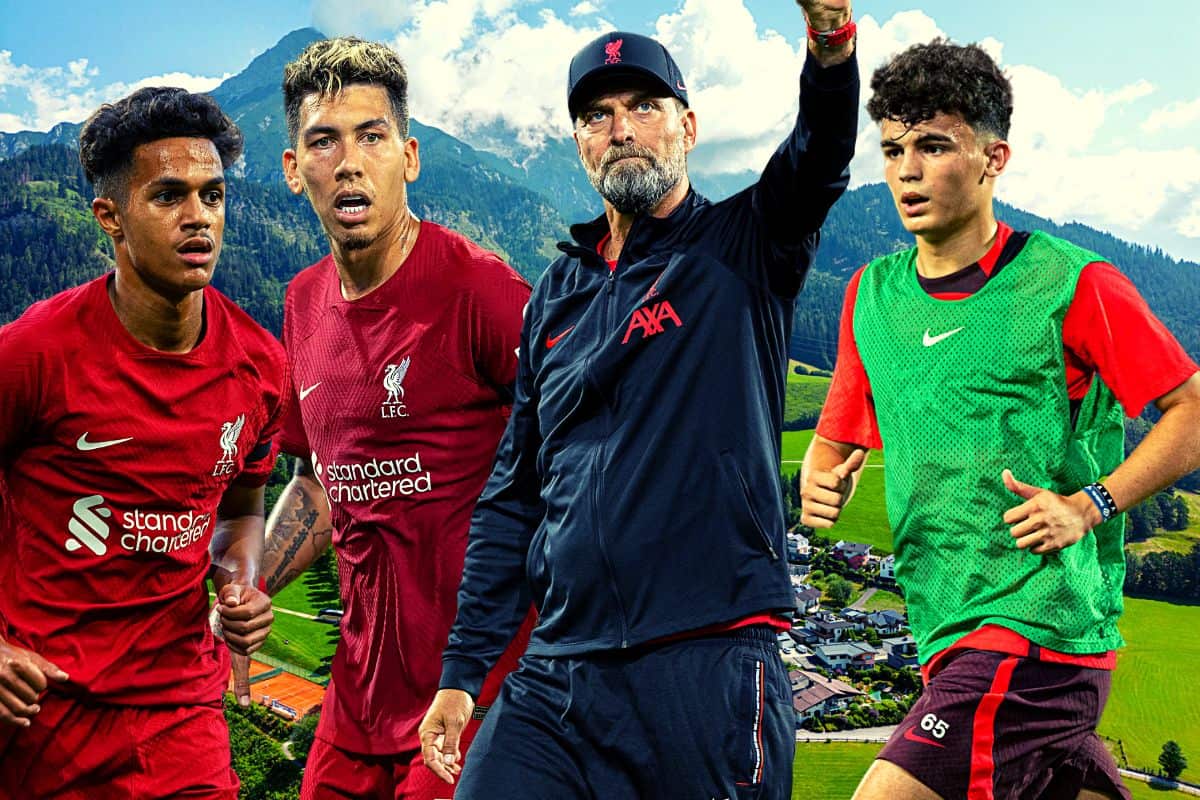 With the season edging ever closer, there are a number of things we’ve learned from Liverpool’s latest pre-season camp in Austria.

The Reds are set to return home on Friday, ahead of a weekend that will see them play two matches in two days.

Saturday’s Community Shield clash vs. Man City will be followed by a friendly against Strasbourg at Anfield the next day.

Despite a 1-0 defeat to Red Bull Salzburg on Wednesday night, Jurgen Klopp is happy with the progress his side has made in the latest stage of their summer schedule.

So what exactly can we take from Liverpool’s week in Saalfelden?

6 are playing catch up

There’s a strong argument to say pre-season is the worst possible time to be injured. Caoimhin Kelleher, Calvin Ramsay and Kaide Gordon have been absent for some time, with no timescales set on their return.

New signing Ramsay underwent various tests in the gym alongside the rest of the squad on the first day of pre-season, before medical staff discovered an injury that Klopp has said they must “be careful” with.

It was a similar story for goalkeeper Kelleher, who hasn’t been seen since the first two days of pre-season. 17-year-old Gordon made the trip to Austria but is yet to resume training, having picked up an issue in the latter stages of 2021/22.

Liverpool’s most significant injury blow of the summer came when Diogo Jota suffered a recurrence of the hamstring injury he picked up on international duty in June.

He was left out of Liverpool’s trip to Austria to work on his recovery at the AXA Training Centre, as was Alex Oxlade-Chamberlain, who also picked up a hamstring issue in the pre-season friendly against Crystal Palace earlier this month.

Alisson hasn’t featured since the friendly vs. Man United, after picking up a knock in Singapore. The Brazilian is now back in light training, but it’s far from ideal preparation for the new season. 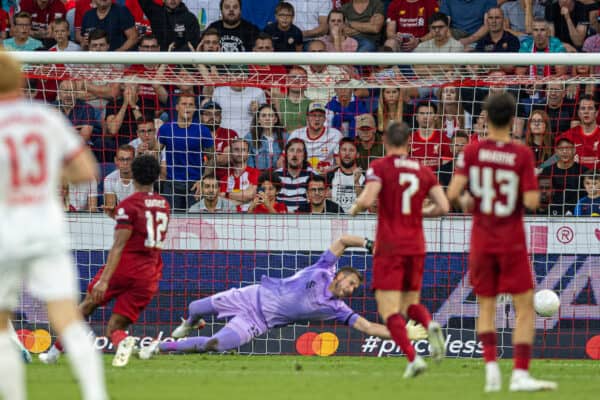 Those injuries to Alisson and Kelleher have meant third-choice goalkeeper Adrian has enjoyed plenty of match action during pre-season.

However, with just days to go until the Community Shield, and just over a week until the Reds begin their Premier League campaign at Fulham, Liverpool really do need Alisson or Kelleher back to full fitness.

It’s Liverpool’s No. 1 who is most likely to be back first, with Klopp declaring him closest to a return out of any of the club’s current injured players.

He returned to light training earlier this week, but Klopp ruled him out of the clash against City in his pre-match press conference. 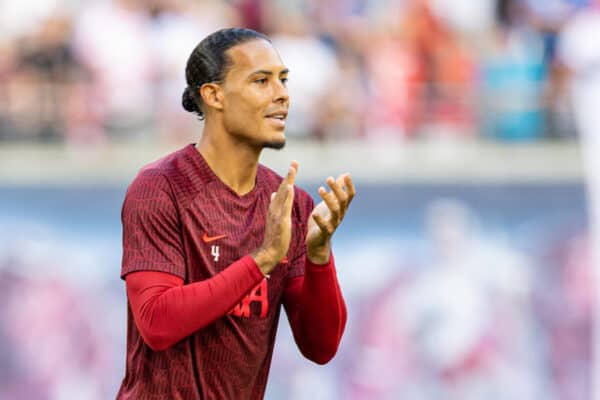 With Joe Gomez signing a new long-term contract with the Reds earlier this summer, Klopp has an array of defensive talent to choose from at centre-back.

Ibrahima Konate ended the previous campaign as Virgil van Dijk‘s centre-back partner, but it seems another player could be set to start alongside the Dutchman against City.

It was Joel Matip who partnered Van Dijk in the last 30 minutes of the Salzburg friendly, in a team that looked likely to be the one that would start together at the King Power Stadium on Saturday.

Trent Alexander-Arnold and Andy Robertson made up the back four, with a midfield three of Fabinho, Jordan Henderson and Thiago. Mohamed Salah, Luis Diaz and Roberto Firmino were in attack.

Matip may well get the nod against City, and it will be interesting to see if that remains the case at Craven Cottage one week later. 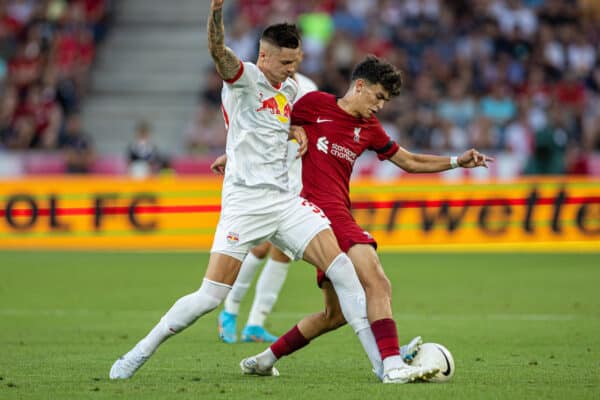 Of all the academy prospects to feature with the first-team in pre-season, one has really stood out. 17-year-old Stefan Bajcetic looks a class act.

It was interesting to see the Spaniard feature in a strong-looking side in the second half against RB Leipzig last week, and he was given another 45 minutes to impress against Salzburg on Wednesday.

Bajcetic has looked anything but overawed at the base of Liverpool’s midfield. Comfortable on the ball, pressing well and not afraid to put his foot in with a tackle.

His involvement over pre-season would suggest he could be in line for more first-team action this season. Have Liverpool found their Fabinho alternative from within? 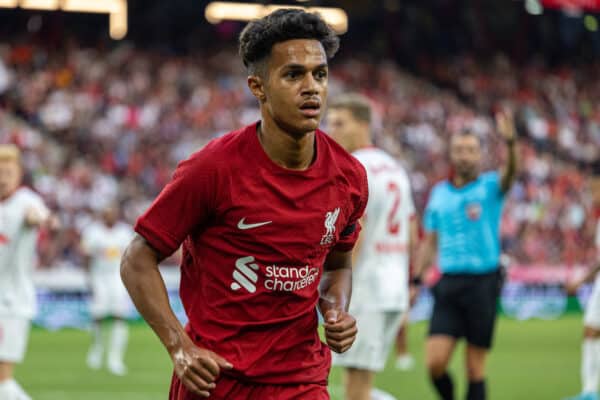 Given his hefty price tag, Darwin Nunez is the Liverpool new boy everybody has had their eyes on this summer.

However, Fabio Carvalho‘s start to life at the club certainly shouldn’t go unnoticed.

At 19, the Portuguese is certainly one for the future, but his performances against Leipzig and Salzburg proved he is also one for the present.

Carvalho has been used as part of a midfield three and on the left-side of the attack over pre-season, and his creativity and quality on the ball is something to be admired. He’ll be a real asset for the Reds in the years to come.

Firmino in pole position over Nunez 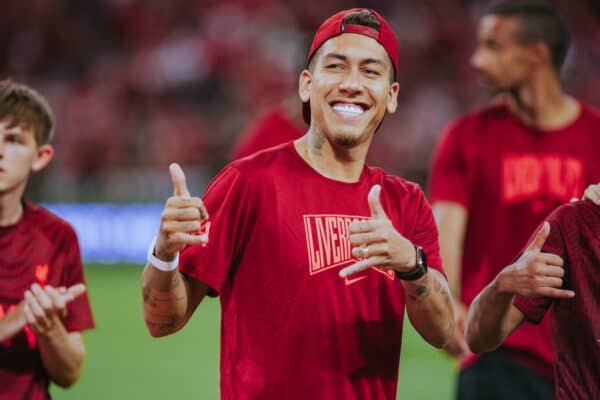 Nunez opened his Liverpool account in emphatic fashion with four goals against Leipzig, but Klopp’s recent team selections would suggest Firmino may be ahead of him in the pecking order for now.

It was interesting to see the Reds’ new No. 27 start in what looked to be more of a ‘B team’ against Salzburg.

That may have been something to do with the fact he linked up so well with the likes of Elliott and Carvalho against Leipzig, but if Klopp was planning on unleashing Nunez against City, you’d expect him to have lined up alongside Salah and Diaz in the second half.

Firmino looked particularly sharp against Leipzig last week, with Klopp recently reiterating his belief that the Brazilian is a “world class” striker.

It could be that the plan is to ease Nunez into action, as we’ve seen with a lot of Klopp’s signings down the years.

Team bond stronger than ever

“I told the boys [that] I never saw something like this. It’s the truth.

“This is the basis we have to use. We as a group, the way we interact really with each other is something special, and we have to make sure we can use that for something big.”

Those were Klopp’s words when reflecting on this year’s annual initiations night.

While the focus in Austria has primarily been on preparations for the new season on the pitch, there has been plenty of time off it to forge new bonds and strengthen the team spirit.

The open mic night was one such example and we’ve already seen brilliant footage of one staff member stealing the show with his rendition of Vanilla Ice’s ‘Ice Ice Baby’.

A special group. Let’s hope for a special season.