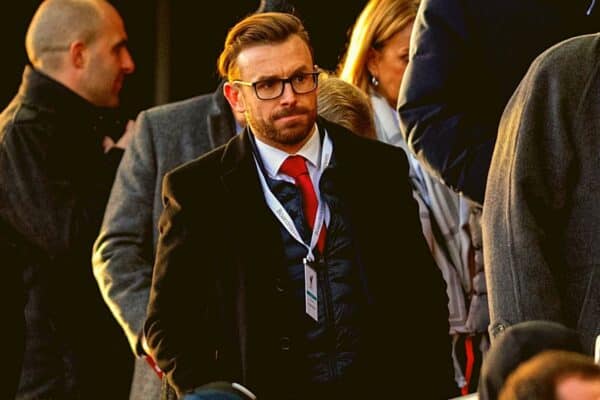 Julian Ward has officially begun his duties as Liverpool’s new sporting director and already made a big impression, so who is he and what does he bring to the role?

When Liverpool announced that, as expected, Michael Edwards would be vacating his role on the expiry of his contract this summer, there were concerns among supporters.

Edwards had built a formidable reputation during his time in the sporting director job, with his knack for savvy signings and sales, fronting the club’s recruitment setup, setting up an impossible task to replace him.

Liverpool opted to promote from within, and after stint in a supporting role beneath Edwards, Ward officially took over as sporting director on July 1.

So who is the new man making a big impact?

How long has he been at Liverpool?

Though they are an increasingly important aspect of a modern football setup, the sporting director rarely enjoys a high profile.

But Ward’s CV is certainly an impressive one, taking him through Portugal, South America and back to his native Merseyside.

That allowed him to take up analyst and consultancy jobs with the FA and ProZone, before heading abroad.

He worked as head of analysis and technical scouting for the Portuguese Football Federation before returning to England as South American scouting strategist for Man City.

After two years he was headhunted by Liverpool, picking up the position of European scouting manager for Spain and Portugal from 2012.

In 2015, Ward shifted into the role of loan pathways and football partnerships manager, leading the team in charge of maintaining contact with and arranging moves for the club’s loanees.

It can be argued that this was the perfect primer for his next step, as he began as assistant sporting director at the end of 2020 and then, a decade after joining, filling the lead role.

When did he begin as sporting director?

While Ward’s job title officially changed at the beginning of July, he has been quietly increasing his duties over the last year-and-a-half.

Under the guidance of Edwards, who had been preparing for his departure, the 41-year-old was entrusted to take the lead on various high-profile deals.

He was involved in a chaotic end to the winter transfer window in 2021 and then central to the arrivals of Ibrahima Konate and Luis Diaz over the following year.

Ward has also been credited as influential in contract talks with the likes of Trent Alexander-Arnold, Virgil van Dijk, Alisson and Andy Robertson in his previous role as Edwards’ assistant.

What has Klopp said?

When it was announced that Ward would be taking over from Edwards on a full-time basis, Jurgen Klopp hailed the club’s structure:

“Julian and I have worked closely since he became loans and pathway manager, plus even more so in his wider role during the past 12 months.

“We have so many brilliant people here, all of whom contribute to what we have achieved and I have nothing but confidence we will continue to develop, progress and improve as an organisation.”

Prior to that, during Ward’s stint as loan pathways and football partnerships manager, the boss enthused:

“So if you have to go on loan, the best thing that can happen is that you have a contract with Liverpool, because then Jules is looking after you, let me say it like this.”

And following the extension of Mohamed Salah‘s contract, when Ward and Jonathan Bamber, the club’s general counsel, travelled to Mykonos to get the deal over the line, Klopp noted his influence:

“Of course it has taken a little time but that’s absolutely OK and the best things are always worth waiting for anyway.

“Mo is one of the best players in the world; it’s only normal there are things to sort when you are at his level.

“So big credit to Julian Ward and Mike Gordon for guiding us to this destination.”

And what can Liverpool fans expect in the future?

While Liverpool’s recruitment strategy is more than just its figurehead, with a number of opinions trusted, it stands to reason that every sporting director has their own unique brand.

Particularly in his early years in the job, Edwards relied upon his contacts in English football, which was certainly evident in regular dealings with Bournemouth.

For Ward, it is clear that his experience in Portugal has given Liverpool a new avenue to explore in the transfer market, with his connections to a nation that is not at the forefront of many clubs’ transfer plans.

He was pivotal in landing Diaz from Porto and Darwin Nunez from Benfica, while his fluency in the language will have been invaluable in talks with the family of Fabio Carvalho.

Academy left-back Owen Beck, meanwhile, will spend the 2022/23 campaign on loan with Primeira Liga side Famalicao.

On a fundamental level, though, Liverpool fans can seemingly expect more of the same as Ward takes over from Edwards, with the club’s succession plan proving to be a flawless one so far.

It is another example of the Reds’ dedication to promoting from within and rewarding the performance of those already at the club.