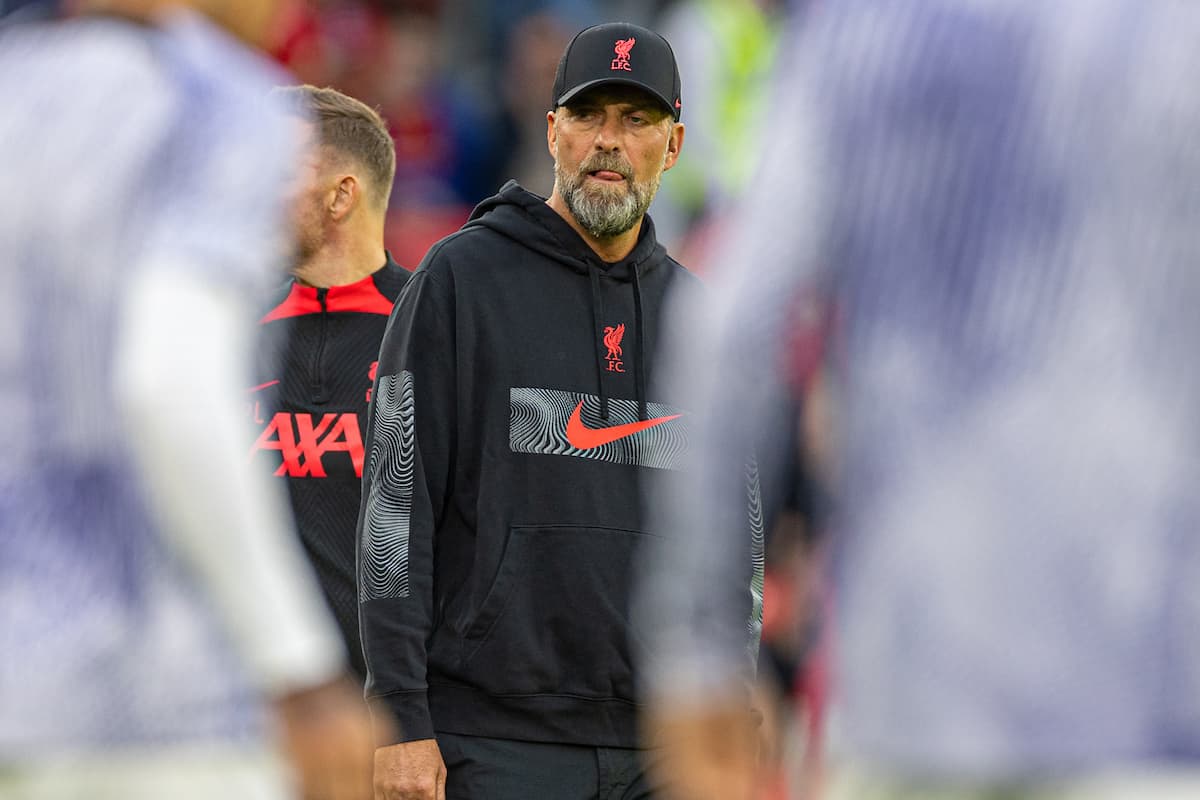 With injuries continuing to mount and results getting worse by the week, Jurgen Klopp has given another hint that he wants a new signing before deadline day.

For much of the transfer window, Klopp has been steadfast in his stance that Liverpool’s incoming business is already complete.

But an awful start to the campaign, with Monday’s 2-1 loss at Man United compounding previous draws with Fulham and Crystal Palace, has come with it an ongoing injury crisis.

Naby Keita is the latest to join the absentees list – or rejoin, having yet to feature in the Premier League due to an earlier illness – which also includes fellow midfielders Thiago, Curtis Jones and Alex Oxlade-Chamberlain.

There have long been calls for another signing in the middle of the park before 11pm on September 1, and in recent days, Klopp’s words on the situation have changed.

Back in July, the manager named nine midfield options and asked: “Where is the need for a midfielder? I wait for the day when somebody comes to me and tells me why, exactly.”

But before the trip to Old Trafford, Klopp admitted he would “always look to strengthen,” suggesting his hands were tied by the club’s financial limits and adding that “we are not in charge of what we can spend.”

?? "There are five million ways to win a football game, we only have to find one… So far we didn't find that one in the three games."

After another bitter result and another injury blow, though, his reply to a question from beIN SPORTS served as a big indication that he does, in fact, want another signing.

“I cannot really say anything about that,” he smiled, when asked if there was any chance of adding to the squad.

“I try to do the job I can do and then we have to see what we are able to do.”

This served as a follow-on from his pre-match comments, perhaps putting pressure on the club’s owners to back him further in the transfer market.

Liverpool have already spent a combined £99.2 million to bring in Darwin Nunez, Fabio Carvalho and Calvin Ramsay, while funds have also been used to agree new long-term contracts for the likes of Mohamed Salah and Diogo Jota.

But the sales of Sadio Mane, Neco Williams, Takumi Minamino and Ben Davies have recouped £71.6 million, and the wages of Divock Origi and Loris Karius have been cut from the bill.

It is difficult to speculate whether there genuinely is no money for Klopp to spend, or whether he and the club’s recruitment staff have simply not settled on the right target.

There is no denying, though, that Liverpool find themselves in a bind and could certainly benefit from one final addition.