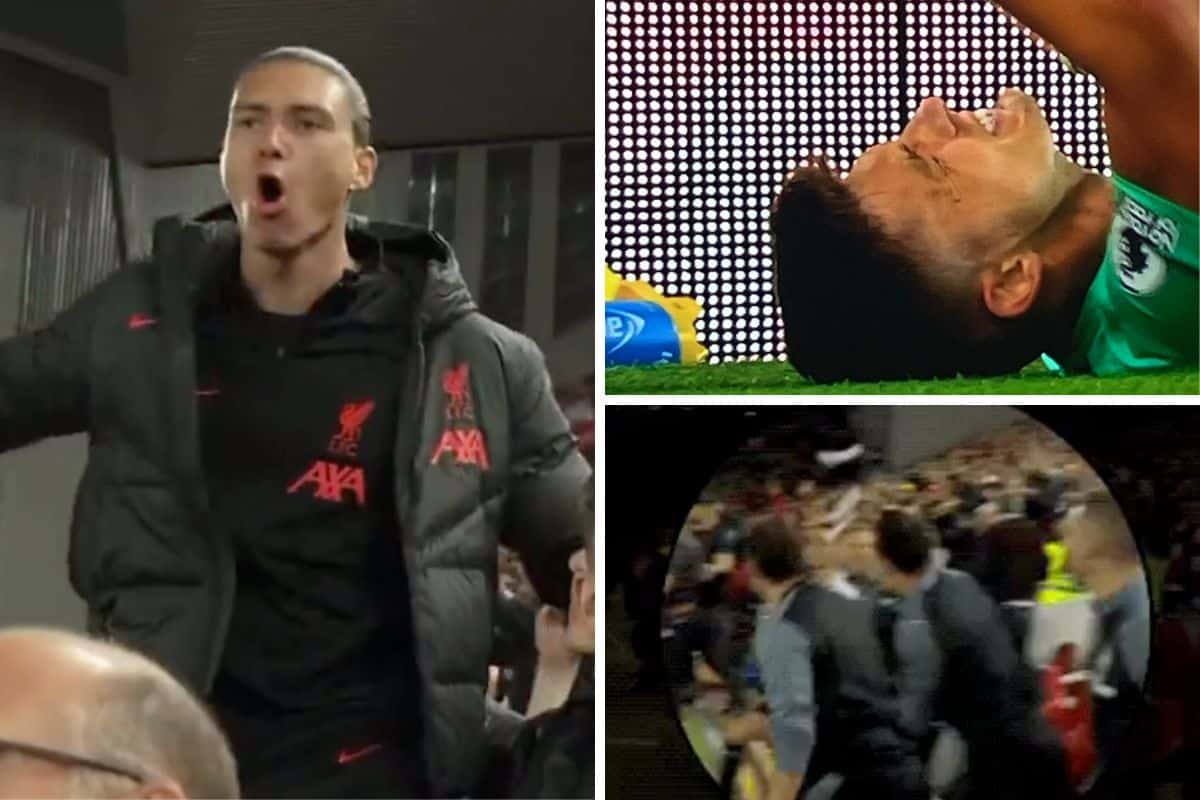 The Reds secured their first league win of the season with a 9-0 victory against Bournemouth on Saturday, but a late win like this one feels even sweeter, right?

After Newcastle did all they could to run down the clock, their blatant timewasting came back to bite when substitute Carvalho lashed in the winner with the last kick of the game.

Even before the winner, the away side’s conduct had led to tension between both benches, so when the Reds went ahead, it was no surprise to see things boil over slightly!

Here are four things fans noticed from another memorable night at Anfield.

Nunez loved every second of it!

Darwin Nunez was, of course, unable to feature in this game, as he served the final match of a three-game suspension following his sending off against Crystal Palace.

But that didn’t stop him from enjoying the fun behind the Liverpool substitutes bench!

When the two benches clashed after Carvalho’s winner, the Uruguayan could be seen hurling abuse at the Newcastle coaching staff.

Darwin Nunez is hilarious. He backs it. pic.twitter.com/NtP8dbw7Z3

Nick Pope was ‘injured’ and took 94 seconds for play to restart.

Liverpools corner from which they scored the winner was won at 96:34, some 94 seconds after the original 5 minutes was up…#LIVNEW pic.twitter.com/nz7SCudMh8

At times, it felt as if the ball was in Nick Pope’s hands or out of play a lot more often than it was actually was on the pitch.

When the Newcastle goalkeeper went down ‘injured’ in stoppage, it took 94 seconds for play to restart.

Obviously all fun and games in the end last night, but time wasting is genuinely a big problem for the Premier League at the moment. Nick Pope should’ve been booked after less than 10 mins yesterday to set a precedent – fans don’t pay £50+ to see that shite.

Nick Pope sits down for almost three minutes and BT Sport acting as if Andre Marriner shouldn’t have added on the extra time.

He really is the gift that keeps on giving, isn’t he?

In amongst the bedlam of the celebrations after the winner, Joel Matip could be seen celebrating on his knees in the Liverpool dugout.

What he was doing, we don’t know, but we absolutely love it.

Here for the Joel Matip shithousery whilst celebrating the goal in front of the Newcastle bench ??? pic.twitter.com/Z7Z7QGhRDx

No wonder the Liverpool bench enjoyed celebrating in front of Eddie Howe and his backroom team!

In the aftermath of the game, BT Sport captured footage that appeared to show a Newcastle staff member launching an object towards the Liverpool bench.

No place for that in the game, surely?

They quite rightly deserved to be booed off. Awful awful tactics.

They got what they deserved. Nothing. pic.twitter.com/mGnXl4U6Ft

Not sure I can remember the last time a team was booed off like this at Anfield, but can they really have any complaints?