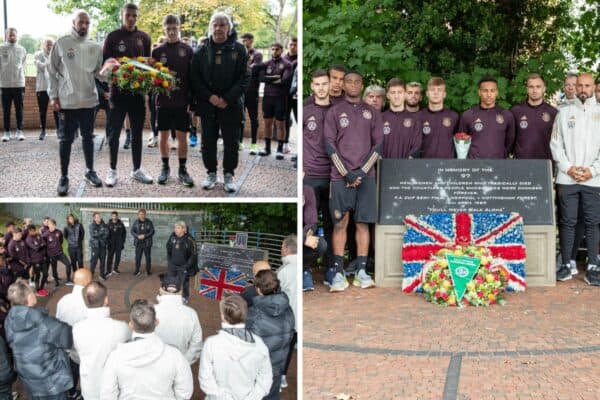 Ahead of their meeting with England on Tuesday, Germany under-21’s paid their respects to the 97 at the Hillsborough memorial in Sheffield.

Images posted on their official social media channels show the young side placing a commemorative Union Jack wreath and a bouquet of flowers by the memorial as a mark of respect.

With their clash against England taking place at Bramall Lane, the home of Sheffield United, Antonio Di Salvo’s side took the opportunity to visit the Hillsborough memorial earlier in the day.

After laying the wreath, the players had a photo by the memorial, in what was was a valuable opportunity for them to learn about the horrifying events of the tragedy, as well as the ongoing fight for justice for the 97 supporters who lost their lives.

The official Twitter account of Germany’s youth teams shared the images along with the messages “IN MEMORY OF THE 97” and “YOU’LL NEVER WALK ALONE.”

Last year, after Andrew Devine died 32 years after the disaster, the number of supporters recognised as being unlawfully killed at Hillsborough rose to to 97.

It’s a day that will never be forgotten, and it’s nice to see the Germany coaching staff recognising the importance of detailing the horrifying events to their young players, while taking a moment to pay their respects.

A touch of class.