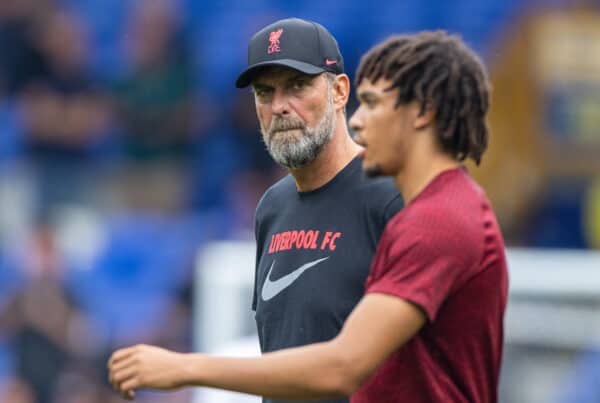 Trent Alexander-Arnold‘s name has been readily discussed in recent days after his time with England, and Jurgen Klopp knows his decision would be different but he would not be pulled into creating headlines.

The right-back went unused throughout England’s two internationals during the September break, remaining on the bench during the defeat in Italy and out of the squad altogether against Germany.

There is a growing sense that he will not make the final 26-man squad for the World Cup in November with Gareth Southgate preferring the likes of Kieran Trippier, Reece James and Kyle Walker.

The England manager has denied that he is out of the running but did say that Trippier’s “all-round game is ahead” of Alexander-Arnold’s.

It’s made for farreaching discussions over Liverpool’s No. 66, who has been a key pillar in Jurgen Klopp‘s side and remains so despite a turbulent start to the season.

At the first opportunity of Klopp being back in front of the media after a prolonged period, the subject of Alexander-Arnold, of course, came up.

Klopp was hesitant to talk as he knows his words will create headlines but stressed that he sees the situation with Alexander-Arnold “differently.”

“You really want to open this box? I mean it, you are an English journalist and we cannot discuss selections until the World Cup starts, it’s one of the reasons why you make massive stories of these things,” Klopp said.

“Why the team cannot prepare properly. If you ask me for my honest opinion, you will create headlines, it’s clear.

“It helps Germany, maybe, it doesn’t help England. I don’t know why we do that.

“A manager picks a player, or not, which I would obviously decide differently but I’m not in charge of this team and that’s how it is. If you want to discuss it, I have a lot of things to say but I’m not sure it makes sense.

“We are fine here because it’s completely different because I see him differently. It’s obvious.

“There are stories out there all the time that talk about him and say he’s not a good defender, but that’s not true,” Klopp continued.

“He is a good defender, he doesn’t always defend good, that is true as well, but that is what we’re working on, he is a young player, he is 23.

“There is space for improvement, definitely, but we only discuss it on the level we discuss it because his offensive impact is so extreme for us, it could be for each team in the world.

“My point of view, it’s an easy pick. Whichever team I would coach in the moment, I would sign him because he is exceptional.

“Is he always exceptional? No.

“The rest now is that it is Gareth’s job to find a team, and England is obviously blessed with a lot of really talented players in a similar position and it’s difficult to line them all up together.

“In this case, it could work, Reece James can play in a three in the back and that would be interesting to see how they could interchange positions.

“The only thing I can really say is that I see it differently, but that does not mean it is right or wrong.

“For Trent, he came back and accepts the decision of the manager because he understands football pretty well, he’s an extremely smart boy. As a player you can never do more than offer what you can offer.

“In football, there is one guy who decides if that is good enough or not and that’s the manager. Here, more often than not it’s the case he is picked and for England, obviously, not.”