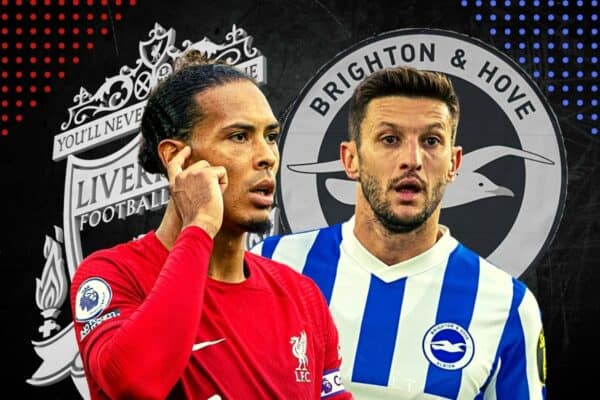 Liverpool are finally back in action on Saturday afternoon, with Graham Potter-less Brighton hoping to be a nuisance at Anfield.

It has been 17 days since the Reds beat Ajax 2-1 in the Champions League, with their season halted by the death of the Queen and then the international break.

Now is the time for Liverpool to kick into gear after a sluggish start to the campaign, though, and they welcome the Seagulls to Merseyside this weekend.

Potter’s exit to Chelsea acts as a huge blow for the seaside outfit and it is now up to new manager Roberto De Zerbi to turn things around.

As always, we got in touch Brighton fan and football finance expert Kieran Maguire (@KieranMaguire) to hear about life after Potter, Liverpool’s issues and much more.

If someone had offered us 13 points from the first six matches we would have snapped their hands off.

Having said that, it has been a relatively unchallenging start to the season in terms of opponents faced.

Winning at Old Trafford for the first time is something to savour, but it was a club in disarray that we faced and Man United conceded four the following week.

Similarly, beating Leicester 5-2 was great, but again a week later they let in six, so perhaps it was not as big an achievement as some have made out.

How big a blow is Potter’s departure?

It’s a huge disappointment – he was the ideal coach for the club and perhaps the club was ideal for him, too.

I suspect that if Chelsea have a run of three wins in 25 this season, as we did in 2021/22, he will struggle to be in a job, such is the level of scrutiny that comes with that club.

It is part soap opera and part football club.

Potter is a measured, humane, proportionate and well-rounded person, as well as an excellent coach, and will be missed on many levels.

He spent a night out on the streets in a sleeping bag last year to highlight the issue of homelessness in Brighton, which has the highest rate in the country.

I wish him all the best in his professional career, but not at Chelsea under their current classless owners, although if anyone can make a ‘4-4-3 formation’ work, it is probably Graham Potter!

He certainly left the club at the right time in terms of his reputation being held high.

We are playing not just Liverpool, but also Man City – where I suspect we will have a lot of support from Reds fans – Tottenham and Chelsea in October, so the chances of us being still fourth in the table at the end of October are somewhere between slim and none.

Do you have high hopes for Roberto De Zerbi?

It’s very much a blank canvas with Roberto De Zerbi.

He has experience of coaching a small club in one of Europe’s five big leagues and by all accounts wants his teams to take risks and play attacking football.

That puts him in a similar position to Potter.

He will, by all accounts, be more demonstrative on the touchline, which some fans see as a sign of ‘passion’, but I’ve never been convinced that screaming and shouting is correlated to good decision-making.

As for Liverpool, what do you think has gone wrong so far this season?

Too many very good players are not performing at their best.

Sadio Mane was perhaps a bigger loss than has been given credit for, as he could do the unexpected.

It’s also only a few games into the season and Liverpool could go on a long run of wins, as has been the case so often in recent years.

Over the past few seasons, we have become familiar with the clubs at the very top generating huge numbers of points, but it was as recently as 2020/21 that Liverpool failed to win 18 Premier League matches out of 38.

Top three, but could go second.

Erling Haaland is looking like an unstoppable force for City and seems a bargain purchase for them, so it is difficult to see anyone genuinely challenging them, despite Arsenal‘s good start to the season.

Do you think Moises Caicedo would fit in at Liverpool?

I think Moises Caicedo would be perfect.

He has a good engine, can score goals, is superb at breaking up the opposition play and often leaves you wondering how he makes tackles.

By all accounts, he is a great lad, too.

Caicedo is also young and can improve significantly if he chooses to focus on his technical and tactical learning.

Looking ahead to Saturday, where do you see the key battles taking place?

A big fear, as always, is keeping Liverpool at bay from wide positions.

Historically, we played three at the back under Potter and I have no idea what the formation will look like under De Zerbi.

Leandro Trossard is a superb player for us but is not always geared to being a wing-back, and the same is true of Solly March on the opposite flank.

Caicedo and Alexis Mac Allister will have to screen the defence, but they both have performed that role well this season, since Yves Bissouma decided that he wanted to be a bench warmer at Spurs rather than play first-team football.

I suspect that Liverpool will have a relatively unchallenging day out.

The Reds will win comfortably 3-0, as Brighton take their time to acclimatise to the new manager.