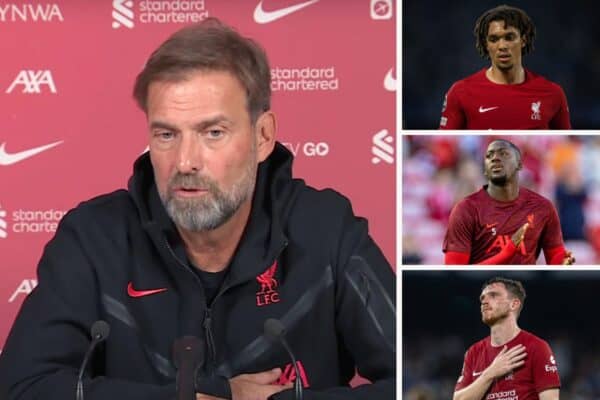 Jurgen Klopp addressed the media on Friday ahead of Liverpool’s long-awaited return to action after the international break.

Here are five key points from the boss before Liverpool’s home clash with Brighton:

“Do you really want to open this box? I mean it,” Klopp warned reporters after the inevitable questions regarding Trent Alexander-Arnold‘s England situation arose.

Of course they want to, and Jurgen did eventually elaborate on what he really thinks about Gareth Southgate’s use of Liverpool’s most creative player.

Klopp said his right-back wasn’t in brilliant spirits after returning from international duty, but backed him to prove what England are missing in the coming weeks.

“There are stories all the time that people say he isn’t a good defender. That’s not true,” he said.

“Whichever team I would coach in the moment I would sign him, definitely.”

It’s been a while since we heard Jurgen deliver a generally positive injury update, but that’s exactly what we got on Friday.

Andy Robertson, Curtis Jones, Naby Keita and Alex Oxlade-Chamberlain remain out, but Ibrahima Konate could be involved against Brighton.

Klopp went on to add that Robertson “looks really good” and should return next week or the week after.

“Calvin is not ready to play but I’m over the moon that he can train now, it’s really good. He needs training. There will be a moment when he will probably be U21s so that he can get a game, because we play now all the time.

“Kelleher I think will play U21s this weekend. It’s not been his season yet, he’s been injured for a long time, but he looks good in training.

“Ibou needs training as well. Back for the weekend? Depends on training today.”

This could be a defining period in Liverpool’s season, and Klopp knows it.

After an underwhelming start to the campaign, the Reds need points, and they need them quickly, if they are to have any chance of winning the league or the Champions League this season.

“For us now, the next six weeks are obviously very important,” the boss admitted.

“We didn’t have the start we wanted to have, for some explainable reasons and for some reasons unexplainable.

“It was just not good enough in moments. But from here we go. Now, the job is to collect points.”

Fully fit squad by “mid to end” of October?

Klopp was a lot more positive about the players he has available to him and even mentioned a potential timescale for those working their way back to full fitness.

Robertson, Keita, Jones and Oxlade-Chamberlain are still out for now, but the boss seemed to imply that all four should return at some point in October.

“If they all come back and the others stay fit, then we have a squad where we can deal with a lot of football games.

“If we don’t have that, then it’s difficult. You push through and the boys available have to play too often.

“In the moment, it looks like the situation is better. Even the four players I mentioned before are on the way back. Mid to end of October, the squad would be complete if nobody else is out.”

It was great to see Calvin Ramsay back in training this week, wasn’t it?

Jurgen certainly agrees, and was asked what he feels the Scottish right-back can bring to his team when he’s fully fit.

He’s still not expected to feature for the first team for a while, as he builds up fitness, but Klopp says he’s “excited” about Ramsay’s potential.

“We scouted him. I saw a lot of games from him. He did exceptionally well. He’s a real player, he’s really involved in everything. I’m excited about him.

“Then he arrived here and he had the issue with his back and since then, he was out. I saw him in two or three times in training. Now we know much more about him as a boy and now we start working.”