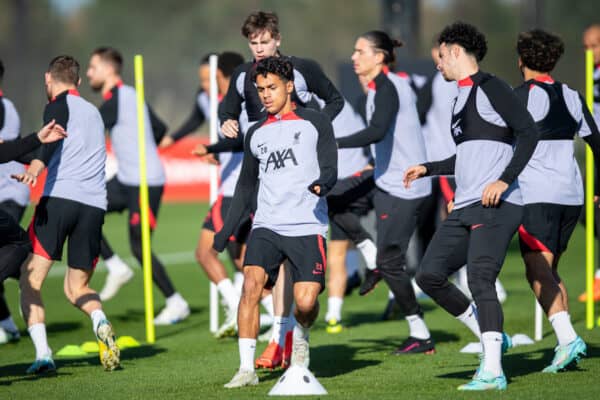 Jurgen Klopp welcomed back three players as Liverpool trained for their trip to Ajax, while three others were called up from the academy ranks.

The Reds fly to Amsterdam on Tuesday evening for their penultimate game of the Champions League group stage, and their second meeting with Ajax this season.

Needing a point to qualify for the last 16 early, Liverpool will be looking to produce a better performance than three days ago, when they were humbled at Nottingham Forest.

It was a boost, then, to see Darwin Nunez back in training and, bar any late issue, available to start at the Johan Cruyff ArenA.

Joining him in returning to the squad were Naby Keita and Ibrahima Konate, who are both back from injury, but there was no sign of Thiago, who is suffering from an ear infection.

There were call-ups for Stefan Bajcetic, Melkamu Frauendorf and Luke Chambers, though, with at least one of those three youngsters likely to make the bench on Wednesday night.

Klopp will almost certainly make further changes to his starting lineup amid a relentless run, with five alterations becoming the norm in recent fixtures.

Along with Nunez, the manager could be considering starts for the likes of Konate, Kostas Tsimikas, Jordan Henderson and Trent Alexander-Arnold.

Despite another setback in the Premier League, the mood among the Liverpool squad was positive, with the autumn sun giving the session a welcome glow after heavy rain on Merseyside.

Over in Amsterdam, there are forecasts of warm temperatures, while Ajax are in strong domestic form having won nine of their 11 Eredivisie games, including each of the last three.