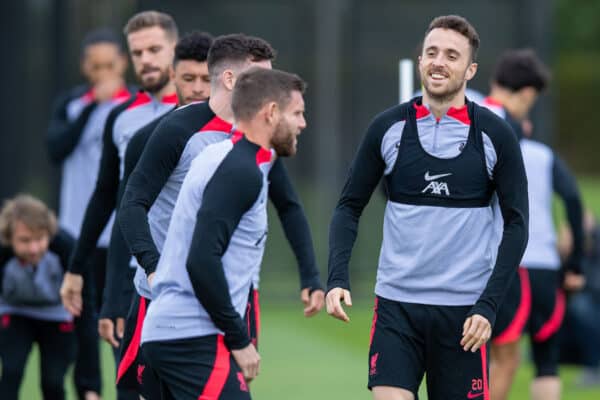 Andy Robertson and Alex Oxlade-Chamberlain were both back in training on Tuesday, as Liverpool prepare for a trip to Rangers in the Champions League.

The Reds head to Glasgow for the fourth game of Group A this week, but before their flight to Scotland, the squad were put through their paces at the AXA Training Centre.

A 23-man group took part in full training on a mild afternoon on Merseyside, with Oxlade-Chamberlain joining them for the initial warmup before individual work.

Robertson, meanwhile, was back for the entire session, with the left-back’s return a welcome boost following a trio of new injuries for Luis Diaz, Trent Alexander-Arnold and Joel Matip.

They join Naby Keita and Arthur on the sidelines, with Calvin Ramsay seemingly absent from the squad again as he did not emerge for training on Tuesday.

Otherwise, there were no surprises, with Ibrahima Konate available following his return to the field in Sunday’s 3-2 loss to Arsenal.

Konate could make his first start of the season at Ibrox, with Joe Gomez potentially needed at right-back following the injury to Alexander-Arnold.

Klopp faces a big decision over his system for the tie, with loss of Diaz seemingly prompting him to reconsider whether to continue with his new 4-4-2.

There are, at least, an abundance of midfield options, with Jordan Henderson, Thiago and Fabinho all taking part in training along with James Milner, Harvey Elliott, Curtis Jones and Fabio Carvalho.

Youngster Stefan Bajcetic was also in the squad, as he remains part of the senior setup along with goalkeepers Marcelo Pitaluga and Fabian Mrozek.

Despite their recent form, there were smiles throughout as Liverpool were led through the session by Pepijn Lijnders and the coaching staff, with an eye on three points that could see them put one foot in the last 16.