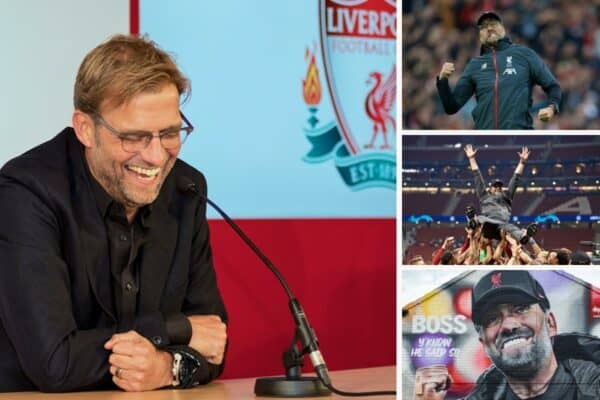 It is seven years ago to the day that Jurgen Klopp sat in front of the world’s press for the first time as Liverpool manager, a day when he called for a change from “doubter to a believer.”

It can be hard to believe that it was 2,557 days ago that Klopp was unveiled as Liverpool’s new manager, and with it came the turn of a new dawn.

Charismatic, humble and with an air of confidence, Klopp had all eyes and ears turned in his direction, eating out of the palm of his hand on October 9, 2015, and not much has changed in the years since!

On his first day he was asked ‘why Liverpool’, when can a title be won, the expectations and the transfer committee – and here we look back at the best of Klopp’s first Liverpool press conference.

The room filled with laughter as Klopp relented to a question of how he would describe himself with Jose Mourinho regarding himself as the ‘special one’.

“I don’t want to describe myself. Does anyone in this room think I can do wonders. No? I’m a very normal guy,” Klopp said.

“I came from the Black Forest and my mother may be sitting in front of the TV, watching this press conference and has said no word until now. But she is a very proud. So I’m the totally normal guy.

And we love that to this day, he drinks out of a mug with ‘The Normal One’ emblazoned on the side!

The weight of history

When the manager arrived it had been 25 years and counting since the club lifted its last league title, and the end for that wait was eagerly anticipated.

It’s a pressure that had long existed inside and outside of Liverpool Football Club and Klopp had a brilliant analogy that he not only said on the first day but kept close throughout the early years.

That being that the weight of the club’s history could not continue to be carried, weighing down those currently seeking to add to it.

“25 years ago, it’s a long time,” Klopp said of the title wait. “All this time people try to get better to improve and to take the next title. History is only the base for us.

“But you’re not allowed to carry around your big history with you in a backpack.”

And the prediction he delivered

A prediction that at least one piece of silverware would be added to the cabinet was made on Klopp’s first day and it was duly delivered, with the Champions League in 2019 that was soon followed by the long-awaited Premier League title.

“This could be a really special day if you want and if you work for it and if you are patient enough.

“We start today in a difficult league against opponents who are bigger and bigger but in a special Liverpool way, we can be successful.

“We can wait for it, I don’t want to say we have to wait for 20 years but when I sit here in four years I’m pretty sure we will have won a title.”

‘I’m so glad he delivered what he said’.

He promised and oh, did he deliver!

Klopp ensures his team play in his image, with passion, emotion and a relentless energy – in other words, ‘full throttle football’.

“Everyone knows me, it’s about emotion, it’s about speed. All the things that make football interesting for me I want to see on the pitch,” he said.

“In this time we will have to get points and win games but not promise today some style of football.

It has delivered the goods and will continue to do so, no doubt.

‘From doubter to believer’

There is no quote remembered more than this one, a line that perfectly surmised where the club was at the time of his arrival and where it needed to get to.

The players, fans and club hierarchy were not reading off the same page and some would debate it was a different book altogether – but that has not been the case under Klopp since.

“It’s only important that we play our own game and the players feel the confidence and the trust of the people,” Klopp said.

“It’s really important that the player feels the difference.

“They have to think they can reach the expectations of the fans, of the press.

“You have to change from a doubter to a believer. We have to start together new and then we will see what will happen this year.”

Everyone had to change their mindset and everyone did just that thanks to Jurgen.