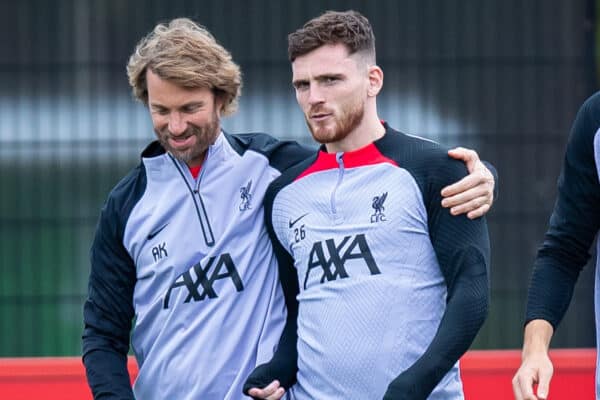 Andy Robertson was back in training alongside his teammates on Tuesday afternoon following a month on the sidelines, with Alex Oxlade-Chamberlain also involved in the session.

For the fourth time in their Champions League campaign this season, the Reds head into their fixture without a win from their previous game, as the consistently inconsistent outings continue.

The defeat at Arsenal was the second in the league this season and salt was rubbed into the wound with injuries to Luis Diaz, Trent Alexander-Arnold and Joel Matip.

Diaz is not to return until after the World Cup with a knee injury, while the Reds are hopeful Alexander-Arnold and Matip will only miss up to two to three weeks of action.

As has been the case throughout the season, Liverpool see a name come off the injury list only to add more to it, but Robertson is the latest to make his return following a knee injury.

The left-back trained alongside his teammates at Kirkby on Tuesday and will be in contention for a place in the matchday squad at Rangers, with the same to be expected for Curtis Jones.

Jones has not featured since the Community Shield and Robertson since the trip to Napoli.

Oxlade-Chamberlain also made an appearance during Liverpool’s warm-up and took part in some ball work, a key part of his recovery from a serious hamstring injury which was expected to keep him out until November.

His training programme will be different to that of the main group having been sidelined since July, but a positive step forward nevertheless.

There was no sighting of Calvin Ramsay, who was missing from the matchday squad at Arsenal despite having made a return from injury last week – with another fitness issue a possibility.

Stefan Bajcetic was part of the squad, while Thiago was sporting a new look having shaved his head once more.