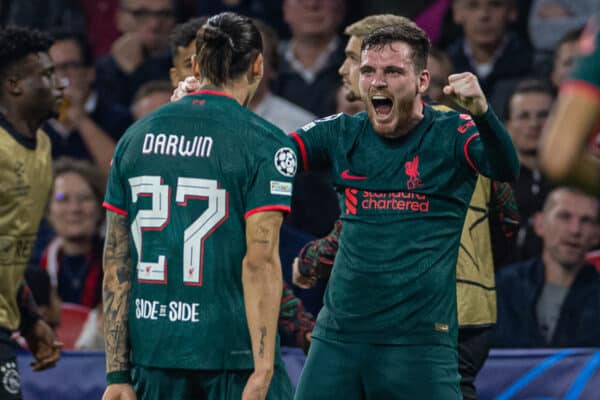 Darwin Nunez fluffed his lines at Ajax, impressively so you have to say, and came in at half-time “really angry” at himself, but Andy Robertson knew just the remedy.

Liverpool’s No. 27 made it four goals in each of his last four starts at Ajax, thanks to a well-placed header that required a show of strength.

A difficult finish, all things considered, the polar opposite of the chance that befell Nunez at the end of the first half when the goal was gaping and he could only hit the upright from close range.

Roberto Firmino‘s hands in the air in disbelief spoke volumes of what had just happened, and while you may have been frustrated, Nunez was “really angry at himself.”

Robertson, who sits next to Nunez in the dressing room, made attempts to talk to him and while the Scot was not certain he’d understood, the second half showed he did.

“Darwin was in at half-time really angry at himself, disappointed in himself for missing that chance,” Robertson told BT Sport.

"We really came into our own in the second half"

"We were very clinical"

Andrew Robertson and Harvey Elliott reflect on a comfortable night away from home ?#UCL | @TheDesKelly pic.twitter.com/O4OFnJscdP

“I sat next to him in the changing room, and I don’t know if he understood a word I said, but I said, ‘I’ll put a cross on your head and you’ll score, no problem’.

“Maybe we need to say that more often!”

You won’t find many that will complain about that.

It is the second time Robertson has provided an assist for Nunez, the first coming in the Community Shield, a partnership that will continue to blossom, no doubt.

And while the miss could be laughed off thanks to Nunez’s response, Jurgen Klopp was delighted with what he saw from his striker during both transitions of the game.

“A really good game, both directions. Helped defending and really played with a big heart today – I liked that a lot,” Klopp said post-match.

“Hopefully we took him off early enough!”

Nunez, of course, missed the trip to Nottingham Forest with a hamstring complaint and was taken off after 63 minutes at Ajax, with all focus now on getting him ready for Leeds‘ visit on Saturday.