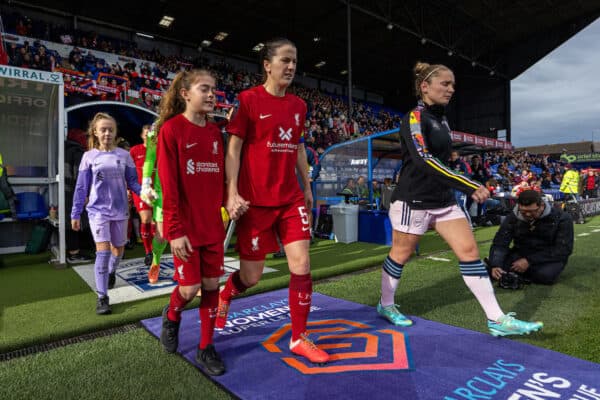 Liverpool were cheered on by a Prenton Park record crowd of 3,348 but suffered a third straight league defeat.

Matt Beard was unhappy Liverpool did not get a penalty when Steph Catley struck a clearance against her own arm early in the second half, but said he could have few complaints with his side’s performance.

“Over the course of the game we’ve done well,” he said. “When you play the top teams it’s tough. I said to the girls at half-time, everything Arsenal touch at the moment turns to gold.

“We didn’t get the rub of the green, there was a clear penalty that wasn’t given. I’m not happy with (referee Anthony Backhouse’s) view, he said it bounced and hit her but she kicked it against her arm. That could have changed the game.

“But I thought we responded well to the second goal because that was a bitter blow.”

The Gunners matched the league record of 12 consecutive wins they already jointly held with Manchester City while goalkeeper Manu Zinsberger extended her consecutive clean sheets record to nine as first half goals from Lia Walti and Frida Maanum secured a 2-0 win at Prenton Park.

“That doesn’t fill the trophy cabinet,” he said when asked about the records. “Of course by doing these records it increases the likelihood of something that we can achieve together. But no, it doesn’t bother me much.”

Arsenal dominated in the first half, with Beth Mead and Kim Little both having excellent chances to add to the scoreline, and although Liverpool improved after the break there never seemed much doubt about the outcome.

Star forward Vivianne Miedema was again on the bench as Eidevall stuck with the same 11 that delivered a stunning 5-1 win over European champions Lyon in midweek – a decision vindicated when Maanum shrugged off two defenders to get Arsenal’s second with 23 minutes gone.

Asked if Maanum’s performance made it harder for Miedema to get back in the side, Eidevall said: “Everyone at Arsenal has to work hard, that’s an obligation that comes with representing this club, in training and in games we are a team, we go 100 per cent.

“That doesn’t only apply to Viv, it applies to everyone.”