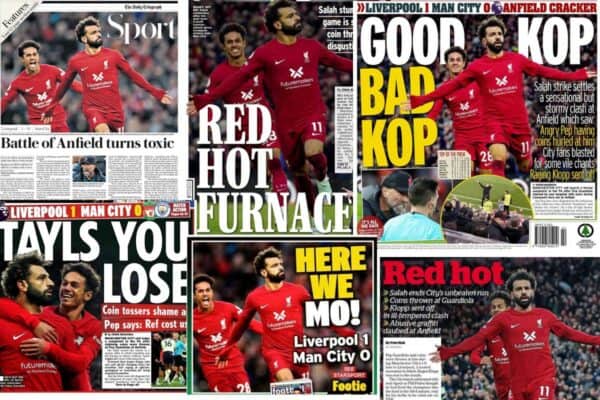 The media were effusive in their praise of Liverpool’s battling display to win 1-0 against Man City, asking where that fight had been earlier in the season.

The Reds were underdogs against Pep Guardiola’s side, but matched their opponents throughout and were more than deserving of their win.

The game was decided by Mohamed Salah‘s superb solo effort, racing through and finishing coolly after missing a chance shortly before.

It was a massive Premier League win for Liverpool, whose season will hopefully change for the better from this point onwards.

Liverpool are not dead…

“When the dust settles, Liverpool will reflect on a display that had all the hallmarks of their best ones under Klopp.

“They were intense, they were aggressive, they defended superbly and they took the big chance when it came. To a man, they were terrific.

“They may not be able to live with City over the full season – they remain 10 points behind in the Premier League table – but they can still cause anyone problems when they play like this.

“Reports of their death, it seems, have been greatly exaggerated.”

Richard Jolly of the Independent was another who hailed the overall performance:

“Liverpool could not compete with Manchester City, Jurgen Klopp had claimed. And over 38 games this season, he may be right, with the gap still standing at 10 points.

“The Reds went from their worst start to a season under him to their best performance since April with a brilliant, blistering display.

“Whatever the financial disparity between them and City that Klopp referenced on Friday, they demonstrated they can defeat them on the pitch. There was no inferiority complex where it mattered most.”

Jason Burt of the Telegraph believes the real Liverpool turned up:

“Where has this Liverpool been all season? After Manchester City had what would have been the opening goal ruled out following a Var check, Pep Guardiola turned to the Main Stand, as Liverpool fans gloated, and screamed in frustration: “This is Anfield”.

“Yes, it is. And it is Liverpool’s home and it is where their defiance shines brightest and most ferociously.

“There were huge amounts of skill as well as spite in what was a modern classic with great saves, missed chances and a relentless power to the football as Mohamed Salah won the battle of the centre-forwards against Erling Haaland, who drew a rare blank, and scored the only goal.”

Phil McNulty of BBC Sport was another who lauded a much-welcome return to form:

“Liverpool went into this match with Manchester City in the rare position of underdogs at Anfield but, as so often in the past, they rose to the occasion in a thunderous atmosphere.

“Klopp’s team were without key forward Luis Diaz and lost defender Ibrahima Konate to injury before the game, forcing 36-year-old James Milner into the right-back role with Joe Gomez in central defence alongside Virgil van Dijk.

“Liverpool’s false start to the season means they are off the pace in the title race with Klopp, who was shown a red card for vehement protests as tensions grew, already downplaying their chances.

“However, they are still the team with the capacity to come closest to City at their best – although great credit must be given to the way Arsenal have set the pace in outstanding style.”

And the Mail‘s Martin Samuel even hinted at an unlikely title challenge:

“And while it is too early to say Liverpool are definitely back, too – they put nine past Bournemouth and still didn’t turn the metaphorical corner – this was a fabulous return to form.

“They rocked City, the old school way. The energy, that relentless, furious ferociousness, was off the charts. One would never have known the trials of the club this season.

“Pep Guardiola wasn’t dismissing them as contenders before this game and, while it will be hard to make up so much ground, Liverpool are one of a handful of teams capable of going on a winning run to widen the title race.”

There were outstanding individuals on show…

Jones was full of praise for the immaculate Joe Gomez:

“If Salah was the matchwinner, the Man of the Match must surely go to Gomez, who delivered one of his best performances in a Liverpool shirt.

“With Ibrahima Konate injured, the England international was moved to centre-back to partner Virgil van Dijk, with James Milner asked to fill in at right back once more.

“Liverpool fans were terrified, but they shouldn’t have worried. Milner was superb, using all of his experience and aggression against Phil Foden, while Gomez was imperious.

“The 25-year-old is not always the most aggressive defender, but he stood up here. He played on the front foot, he read the game superbly, he never lost his concentration once and he played some superb, line-breaking passes to get his side on the front.

“Was Gareth Southgate watching? He should have been. England have a few centre-backs to choose from, but not many of them could have delivered a showing like this, in a game like this, against an opponent like this. Bravo, Joe.”

While This Is Anfield‘s Henry Jackson hailed Salah after his match-winning efforts:

“Salah was superb against City, looking up for the battle immediately and running the visitors’ defence ragged with his pace and power.

“While the Egyptian King missed a gilt-edged opportunity at 0-0, he soon made up for it with his latest iconic moment at Anfield.

“His swivel and first touch made mincemeat of Joao Cancelo, before racing through and burying an unnerving finish into the Kop net to secure all three points.

“Salah is the ultimate big-game player and his contribution here summed up his greatness.”