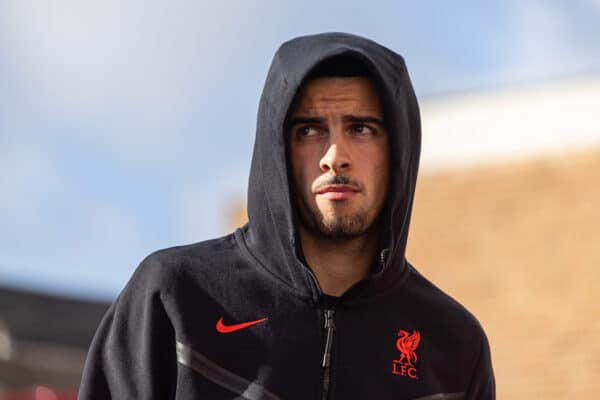 Curtis Jones has “point to prove” after “rare” 10-week injury

Curtis Jones made a surprise first start of the season at Nottingham Forest and after 10 weeks on the sidelines with a “rare” injury, he feels he has a “point to prove.”

After making a last-minute cameo in the Community Shield win at the end of July, Jones was then not seen on the pitch in a Liverpool shirt until the win over West Ham in midweek.

There was a false dawn at the end of August and Jones would ultimately be forced to wait 13 games and 11 weeks for Jurgen Klopp to punch his ticket.

On Saturday, his first start came following an ear infection to Thiago, playing first in the double-midfield pivot before moving to the left side of midfield – his first 90 minutes since May.

His time on the sidelines was thanks to a stress injury in his leg, one that could result in a more serious issue if not treated early – continuing a trend of frustrating injuries.

And it has all left the 21-year-old feeling he has a “point to prove,” with consistency the goal after a stop-start year.

“I was out for 10 weeks. I came on Wednesday and played half an hour, then 90 [at Forest],” Jones told reporters, via the Echo.

“It was a stress response. It was basically swelling in the bone. But if you carry on with it, it can go to a fracture and then a break.

“It was the first time I’d had anything like that, to be honest. Touch wood this doesn’t change, but I’m a kid who never gets injured. I don’t pull hamstrings, quads, calves, stuff like that.

“When I’ve been injured, it’s been like a freak one. I was poked in the eye last season and out for six weeks, and this season I had a stress response in the bone.

“I was out for four weeks, I came back and trained twice, felt it again and was out for another six. It was a difficult time, but now I’m back I’m happy and I have a point to prove.

“I felt it after the Community Shield. I was having pain in my calves, then after that game, I had a different pain, like an ache inside the bone.

“I went for a scan and they said it was a stress response. It’s rare, so I guess I was unfortunate, but now I just have to try and kick on, put it right behind me.”

Jones offered a different option to Klopp at the City Ground in a more “disciplined” role to start, one he feels “comfortable” in and the manager hinted at using his versatility on Friday.

“It’s perfect to have him back, he’s an exceptional player, an exceptional talent in whichever system we play,” Klopp said prior to Saturday’s game. “He can play different positions, which is very helpful.”