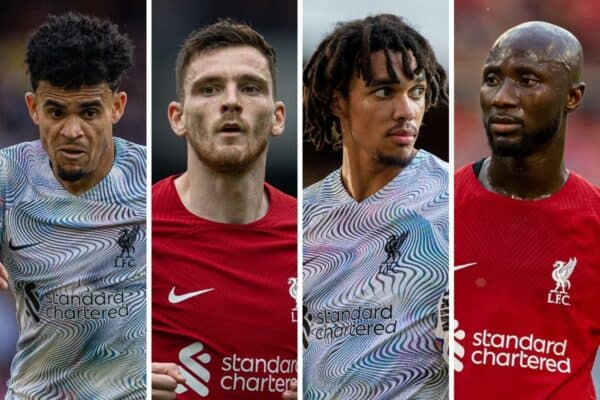 It has been a rotating door policy for injuries at Liverpool so far this season with 19 different players having missed at least one game due to a fitness issue.

It’s like rubbing salt in the wound for an underperforming Reds outfit, with the unrelenting schedule hardly providing time to breathe let alone rest and recover.

While Caoimhin Kelleher, Calvin Ramsay and Ibrahima Konate have all made their matchday returns this month, Trent Alexander-Arnold, Luis Diaz and Joel Matip have since added their names to the injury list.

The medical department has been busy and will continue to be, but what is the current injury situation at Anfield for the likes of Andy Robertson, Arthur and the newly injured trio?

Injury: Knee
Out since: Arsenal (A)
Expected return: After World Cup

Klopp’s initial prognosis after the defeat at Arsenal was the injury is “not good,” with a scan now scheduled for Diaz’s knee, which was in a brace as he left the stadium on crutches.

And it was reported on Monday evening that the Colombian will now be sidelined for six weeks, meaning he won’t be back available until after the World Cup.

Injury: Ankle
Out since: Arsenal (A)
Expected return: Two to three weeks

Alexander-Arnold played the remainder of the first half after an inversion ankle sprain midway through, but swelling and pain prevented him from coming out for the second half at Arsenal.

“[He] twisted the ankle, not good. Trent never, in seven years, went off if he could have played on. He was in too much pain, it started swelling immediately, so we will have to see,” Klopp said.

His lateral ankle ligaments will be the concern but the hope is he has avoided serious injury and could be sidelined for between two to three weeks, report the Times.

Injury: Calf
Out since: Arsenal (A)
Expected return: Two to three weeks

The centre-back was substituted out of the game at the Emirates after 69 minutes and the Athletic have since reported he will now be sidelined for two to three weeks with a calf injury.

It is Matip’s second injury absence of the season after missing the clashes against Crystal Palace, Man United and Bournemouth.

Injury: Calf
Out since: Early September
Expected return: Back in training, bench vs. Rangers on Wednesday likely

Klopp said Jones was the “closest” to make his return before the latest two injuries, having made his return to full training on October 6.

The 21-year-old has not played for the Reds since the Community Shield in July due to a stress fracture and is likely to be named in Wednesday’s squad at Rangers.

One we can now scrub off the injury list, thankfully!

Injury: Knee
Out since: September 7
Expected return: Back in training, bench vs. Rangers on Wednesday likely

An injury before the international break has made for more than a month on the sidelines but he is back at Kirkby having made positive progress.

The Scot was spotted warming up alongside his teammates last week and is now back in full training, with a spot on the bench at Rangers likely.

A muscle injury on the eve of Rangers’ Champions League visit has spelt the end of Arthur‘s 2022, after undergoing surgery on the issue.

His timeline is expected to be anywhere from three to four months, all thanks to a training injury sustained “in a normal situation.”

A bitter blow for the loanee who has featured for just 13 minutes since his move.

Keita has not been involved in a matchday squad since the visit of Crystal Palace and his comeback is “still a little bit away,” says the boss.

Being ommitted from the Champions League group stage squad was a clear indicator of how Liverpool saw his recovery and with no training return as of yet, November remains his likely return – but the World Cup break may have started by then.

In a similar boat to Keita with his return recently described as “still a little bit away,” November looks a more likely timeframe than October, which was a tentative date of return.

With his pre-season ending prematurely and no competitive minutes since March 20, it’s likely Oxlade-Chamberlain is not seen on the pitch until after the World Cup concludes.

Reportedly doing light training now at Kirkby, so ahead of Keita on his return schedule.