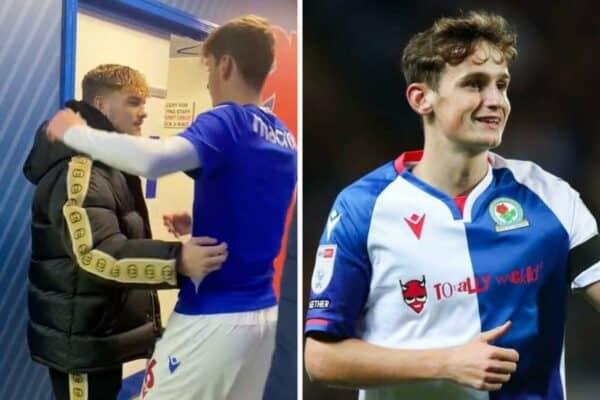 Tyler Morton is enjoying a productive loan spell at Blackburn and his close friend Harvey Elliott was in attendance as he helped push his side to the top of the Championship.

The 19-year-old has featured 17 times for Rovers so far this season, 12 of those coming as part of the XI in what is his first career loan spell.

Morton is readily relied upon by Blackburn boss Jon Dahl Tomasson, who earlier this month hailed the midfielder as a “class player” and “one of the best midfield players regarding regains.”

Like any young player, he has not been without his missteps having made a major error that consigned Blackburn to a narrow defeat against Wigan this month.

But he continues to improve and it is all part of the learning curve in a senior environment, one which Elliott witnessed on Tuesday evening.

On the eve of Liverpool’s meeting with West Ham, Elliott made the short trip to Ewood Park as Blackburn met Sunderland in the Championship.

? Another familiar face back at Ewood tonight! #ROVvSUN | #Rovers ??? pic.twitter.com/FPI2wxz85Y

The two met up outside the changing rooms before the match, with Elliott wishing Morton “good luck” before his start at the base of midfield in a 2-0 victory.

Ben Brereton and Scott Wharton were both on the scoresheet for Blackburn as they moved to the top of the Championship, on games played.

LancsLive noted that Morton “made plenty of ball recoveries and interceptions” throughout and “controlled the tempo of proceedings.”

He played the full 90 minutes as Rovers notched their ninth win of the season, six of which have come on home turf – the best in the division to date.

Blackburn currently sit top of the table with 27 points after the win but the Championship finds itself in an enthralling battle, with only eight points separating the top from 17th place.

Rovers have currently played the most games (16) and could be overtaken by Burnley, Sheffield United, Luton Town, QPR and even Coventry – who sit at the bottom of the table but have five games in hand.