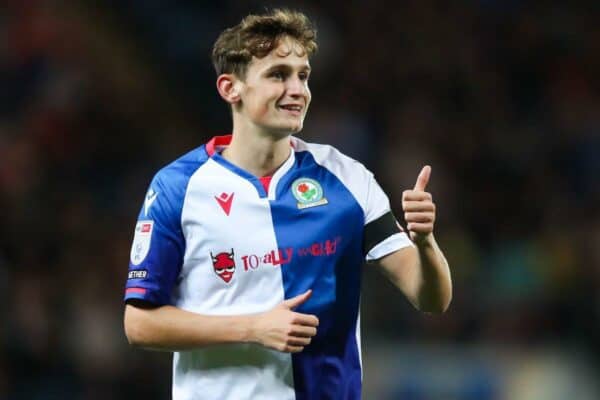 Tyler Morton is emerging as the success story among Liverpool’s 17 loanees, with Blackburn boss Jon Dahl Tomasson hailing him as a “class player.”

There are currently 17 players out on loan from Liverpool this season, though only nine of those have been regular starters for their clubs so far.

Morton has cemented himself as a first-choice pick at Blackburn, with the 19-year-old starting eight of the last nine games for the Championship club, earning Man of the Match in his most recent outing.

A star turn at the base of the midfield in Saturday’s 3-0 win over Rotherham saw the teenager garner rave reviews, including from his manager.

Speaking to RoversTV ahead of a trip to Wigan on Tuesday night, Tomasson praised Morton as a “good mixture” of quality on the ball and hard work off it.

?? Here's what the gaffer had to say about Tyler Morton's performance.#Rovers ??? pic.twitter.com/JZTRjUwumE

“I spoke a couple weeks ago about his regains, he was one of the best midfield players regarding regains, winning the ball.

“What he can do, he sees the game, he can play passes in behind – but you also need players who run in behind before you can play those passes.

“He has a good mixture of class on the ball and also winning regains.

“You can see he’s been in a good school – the Liverpool school, the Jurgen Klopp school – you can see that.

“He’s enjoying life here at Rovers. I like to see the boy, because he’s getting important.”

There will be a pride at Liverpool in the way Morton is performing at Blackburn, with there high hopes among Jurgen Klopp‘s staff after nine appearances for the first team last season.

The hope will be that Morton is able to step up to the senior squad on a permanent basis next term, as was the case for Harvey Elliott following his breakthrough loan spell with Blackburn in 2020/21.

He has spoken in the past of learning from Thiago on the training pitch, and there are comparisons to be made in their awareness in receiving possession and work rate in regaining it.

The on-loan @LFC midfielder's best bits from his Player of the Match display on Saturday.#Rovers ??? pic.twitter.com/UbHw29YsMl

“The first time he came, I said ‘who is this player?’,” Thiago said in November last year, “because he was training amazing with us.”

It is a long road ahead for Morton still, but with Blackburn climbing the table as he continues to impress in the Championship, he finds himself in a strong position.