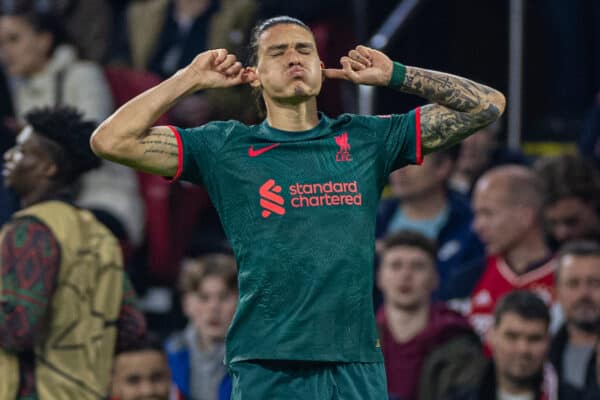 Jurgen Klopp has further explained why he is “so excited” by the potential of Darwin Nunez, pointing out the striker’s impressive expected goals record since joining Liverpool in the summer.

With four goals in his last four starts, Nunez has been one of the Reds’ standout performers in recent weeks, with his performance against Ajax arguably his best since arriving from Benfica.

The Uruguayan endured a difficult start to life at Anfield after being shown a straight red card in Liverpool’s second league game of the season against Crystal Palace, and missing the next three games due to suspension.

However, the Reds’ club-record signing has played his way into form in recent weeks, showing glimpses of his undoubted potential.

At 23 years of age, there’s plenty still to come from Nunez, but Klopp has been particularly encouraged by the forward’s underlying numbers, included his expected goals (xG) record this season.

With just over 0.8 goals expected per 90 minutes, Nunez ranks alongside Man City‘s Erling Haaland for xG among under-23 forwards in Europe’s top five leagues this season, and higher than the Norwegian for expected assists.

For what it’s worth here’s where Darwin Núñez ranks in his more limited amount of minutes ? https://t.co/IePFpYxWQP pic.twitter.com/DO0GRgKKKG

Klopp says the striker’s numbers are “incredible” considering the difficulties he has faced this season.

“For all of these things, his numbers are incredible, to be absolutely honest,” the manager enthused.

“And I’m pretty sure his xG is pretty high as well, he had a few chances that he missed, but he’s scored as well, and he’s involved in a lot of finishing moments, a lot of things.

“The steps he’s making are really big, and that means that he settles in more and more. A great month for him.”

There’s no doubt that Nunez is something of a rough diamond at present, with Klopp and his coaching staff tasked with bringing the best out of the forward in the coming years.

But Klopp believes his potential is “incredible” and has brushed off any suggestions that the striker is not the most technically gifted forward.

“Nobody knows, he doesn’t know,” the Liverpool boss said when asked how good Nunez could eventually be.

“It’s so exciting, but he has to stay fit, he has to be available all the time, and he wasn’t against Nottingham Forest. That’s all important in the life of a professional football player. So we have to work on all the different areas.

“The potential is incredible. It’s not only speed, the attitude is really good, he’s a real worker, and again I tell you, I know there’s some people who think, ‘technically, not sure, first touch’, it’s incredible.

“That he doesn’t bring it on the pitch at the moment all the time, his first touch might be here or there sometimes, it’s nothing to do with technique.

“It’s just a bit too late, awareness, orientation and all these kind of things, but that’s all possible to develop and to learn obviously, and that’s where we’re at.

“It’s really exciting, but where it can go I have no idea.”