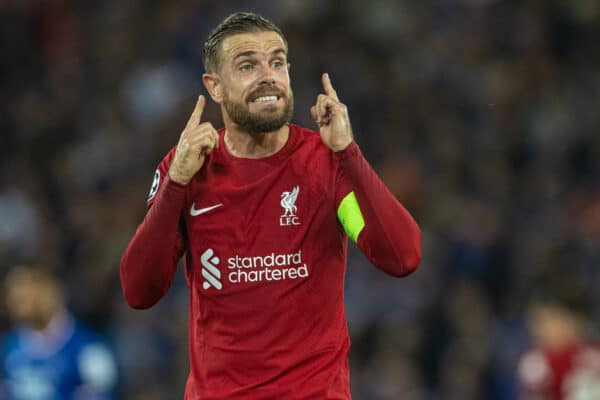 Jordan Henderson has emphasised the need to use outside criticism as “fuel” on the pitch, urging his Liverpool team-mates to “prove people wrong.”

During the Reds’ turbulent start to the season, Henderson has been one of the individuals to attract the most criticism for his performances.

The captain has been far from his best in the middle of the park, but produced an improved display as a new-look setup earned a 2-0 victory over Rangers on Tuesday night.

Speaking to BT Sport after the win, in which Trent Alexander-Arnold answered his detractors with a free-kick opener, Henderson underlined the importance of avoiding social media and turning criticism into “fuel and energy.”

“It can be difficult,” he admitted.

“You try not to listen to social media, especially when you’re going through a little bit of a tough period as an individual or as a team.

“You’ve got to switch off the social media and everything that is the noise around.

“Just try to focus on what you do day to day and improve on your own performance, improve on the team’s performance and just really stay focused on what we’re trying to achieve as a team.

“But it can be difficult. That’s not easy, with everything that goes on in the outside world, it is difficult and it can hurt players at times.

“But you’ve got to find a way to use that as fuel and energy to, when you get on the pitch, prove people wrong.

“That’s what I’ve learned the older I’ve got, really.”

As Liverpool captain, it is Henderson’s role to help his team-mates through difficult periods, both as individuals and as a collective, backed by his leadership group.

The likes of James Milner, Virgil van Dijk and Thiago are vital in supporting those with less experience of tough times, with the 32-year-old thankful for the backing he receives.

“I think I’ve got a sense that certain individuals at times, some of them need an arm round the shoulder and some of them might need a kick up the backside at times,” Henderson explained.

“But it’s trying to find the balance.

“When we’re on the pitch, it’s not personal. We’re trying to shout and dictate and try to do things that are going to help the team.

“But off the field, you can have conversations with players and try to help them as much as possible.

“I feel that responsibility, of course, but we’ve also got other leaders and experienced players within the dressing room that help with that.

“It’s about staying together, staying as a team, especially when you’re going through tough moments.

“We’ve been through plenty of them as a team, and we’ve got to use our experience to get through this one.”