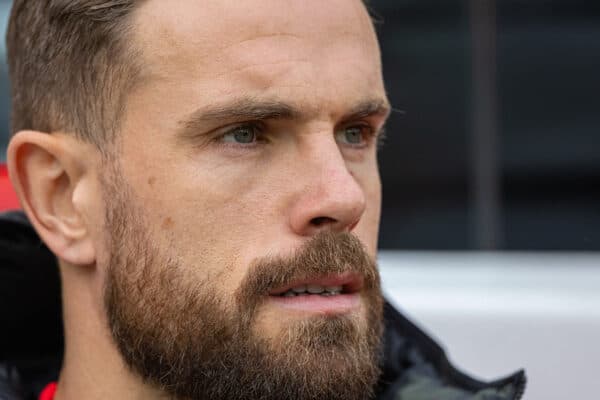 A 22-man squad were pictured in training on Monday evening, but Jordan Henderson was away from the main group on the eve of Napoli’s visit in the final Champions League group game.

The Reds’ task of bouncing back from the weekend’s defeat is far from straightforward, with Serie A leaders Napoli the opposition – a side who have not lost in 17 games this season.

On Monday, Jurgen Klopp said that “we heard already a couple of knocks here and there” from the defeat at Leeds, leaving the manager having to wait and see who is available.

He has already said not to expect “massive rotation” and the players in training at the AXA Training Centre offered a look into who could be in contention at Anfield.

Henderson was not pictured with the team in the main session but, as per PA’s Carl Markham, the captain was undertaking an individual programme, with “no issue” regarding his availability.

Fabinho, Thiago, Curtis Jones, James Milner, Harvey Elliott and Fabio Carvalho all took part in the main session, though, as too Alex Oxlade-Chamberlain who is ineligible for the tie.

Naby Keita, despite having returned to full training, was not spotted but as he is similarly ineligible and undertaking a ‘pre-season’, his absence ought not to be too alarming.

Ibrahima Konate was present and could be in contention to return to the XI after five games out, with Klopp alluding to his involvement, saying “now maybe it’s the moment where he can play.”

Stefan Bajcetic and Melkamu Frauendorf were the two representatives from the academy this time around.