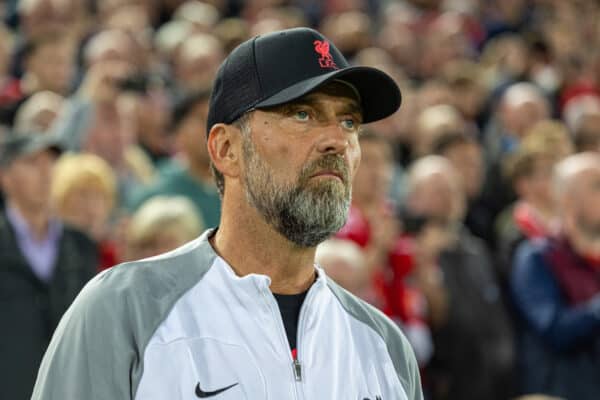 Following remarkable claims from Man City ‘sources’ in certain papers that Jurgen Klopp was “borderline xenophobic,” Klopp and the club have filed a legal complaint.

Prior to Sunday’s meeting at Anfield, Klopp spoke on the disparity that exists between the spending power of three clubs (seemingly Man City, Newcastle and PSG) and the rest.

But after the Reds’ win and following complaints from both clubs over the actions of fans, an unnamed City source, relayed by the Times‘ Paul Hirst, described Klopp’s words as “borderline xenophobic.”

Klopp was asked of the accusation on Tuesday and said “If I would be like this, I would hate myself,” and that it “is miles away from my personality.”

The Times have since removed the phrase from their initial report, confirming the article is now ‘the subject of a legal complaint from Jurgen Klopp and Liverpool FC.’

Another article from the Times, written by Paul Joyce and Martin Bedford, further states that “Liverpool have taken legal advice on Klopp’s behalf regarding the publications that carried the accusations.”

That it was allowed to ever go that far beggars belief, with the line reported without challenge, and Liverpool are right to not let it slide.

The match between Liverpool and City was not without controversy off the pitch, with away supporters singing Hillsborough chants and smearing offensive graffiti on the concourse.

Meanwhile, Klopp was sent off and there were allegations of coin-throwing and an attack on the City bus from Liverpool fans, but three days on those claims have yet been formally reported to the police or any evidence provided.

The City source had accused Klopp of “whipping up tensions” ahead of the game, callously citing xenophobia all the while glossing over the actions of their own supporters in the stands, deflection at its worst.

It’s a clear attempt to change the agenda, with sportwashing in effect through a vehicle that has a duty not to simply regurgitate a message but question its intentions.