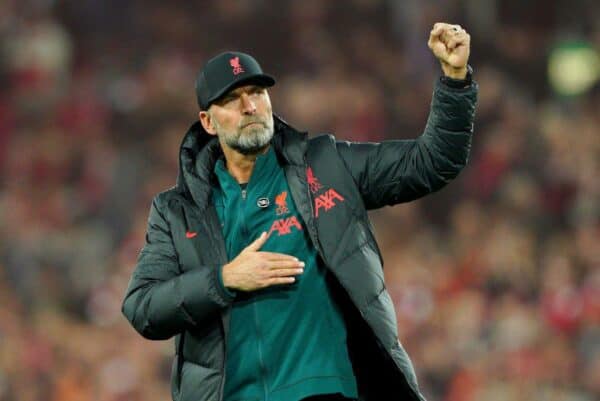 A new report in the aftermath of Liverpool’s 1-0 win over Man City has seen Jurgen Klopp somehow labelled “borderline xenophobic” by the Manchester club.

Sunday saw Liverpool seal a vital win over City at Anfield, with Mohamed Salah scoring the only goal of a raucous game of football.

There have been multiple controversies off the pitch, including City supporters singing Hillsborough chants and daubing offensive graffiti on the concourse of the stadium, while Klopp was sent off for his aggressive protest towards officials.

Liverpool have condemned the individuals involved in taunting those affected by the Hillsborough tragedy, while there have been claims from City that both Pep Guardiola and the team bus were attacked by home fans.

If City officials were to be believed, it all stems from a comment during the breakout section of Klopp’s pre-match press conference on Friday.

That was, of course, a reference to the oil-rich trio of Man City, Paris Saint-Germain and, more recently, Newcastle, who he believes have “no ceiling.”

In a wild claim from an unnamed source from City, relayed by the Times‘ Paul Hirst, this has now been accused of being “borderline xenophobic.”

“This comment angered some at City, who felt Klopp’s words were borderline xenophobic,” Hirst writes.

“City felt that Klopp’s comments whipped up tensions ahead of a game that has a history of trouble.”

It is, quite simply, a disgraceful deflection tactic from a club that has refused to publicly condemn their own supporters’ abuse of the Hillsborough survivors and families.

That may not come as a surprise, given their history in the context of a modern rivalry, with City players filmed singing an anti-Liverpool song that included the lines “battered on the streets” and “victims of it all” in 2019.

Coming after the events outside Anfield before the Champions League tie with Roma – which left supporter Sean Cox with life-changing injuries after an attack from away fans – the connotations were transparent.

And this serves as another bitter chapter in a rivalry that, otherwise, should be considered the most exciting in world football.