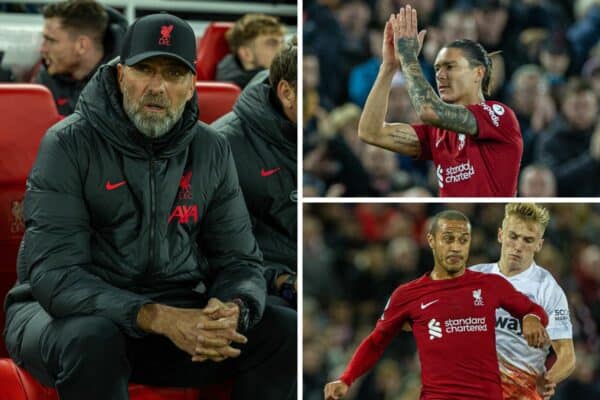 After making it consecutive 1-0 victories by seeing off West Ham at Anfield on Wednesday, Jurgen Klopp explained his in-game substitutions, allaying fears over the likes of Darwin Nunez and Thiago.

It was Nunez’s first-half header that was enough to secure the three points for the Reds, with the Uruguayan scoring his first Anfield goal as a Liverpool player, before Alisson saved a penalty from Jarrod Bowen before half-time.

Klopp’s side were dominant in the first 45 minutes, and would have been hoping to extend their lead in the second period.

But Liverpool struggled to regain their momentum, with some supporters questioning the substitutions made by the German.

Both Nunez and Thiago were withdrawn before the hour mark, with Harvey Elliott and Fabinho replacing them, with West Ham growing into the game after the withdrawal of the Liverpool pair.

After the game, Klopp explained his substitutions, revealing that Nunez was being treated for a minor hamstring complaint at half-time.

“He felt a little bit the hamstring at half-time, so then you have to make early changes, which is absolutely fine, we can do that,” he told Amazon Prime.

The boss went on to allay fears that Nunez’s problem was anything serious, claiming his withdrawal was nothing more than a precaution.

Thiago‘s substitution was also made with one eye on Liverpool’s upcoming fixtures, with Klopp stating his side emerged from the game without any fresh injury concerns.

Fabio Carvalho, Roberto Firmino and Kostas Tsimikas were also substituted in the second period, with Curtis Jones, James Milner and Andy Robertson the other players to get minutes off the bench.

“We have to consider different things. Thiago stretched once on the pitch, which is for me a warning sign that we have to react pretty much on everything, so it was clear we had to change him,” Klopp continued.

“With Darwin, at half-time, everybody said ‘no it’s fine, it’s fine’, but when somebody is five minutes on the bed then I’m concerned as well, it was a precaution.

“Then we needed a bit more size because immediately, with Harvey coming on, we get a bit smaller, and against West Ham, set pieces are a massive feature for them, so we had to figure out how we could deal with all the different situations.

“They’re all OK, I think we picked them all in the right moments.”