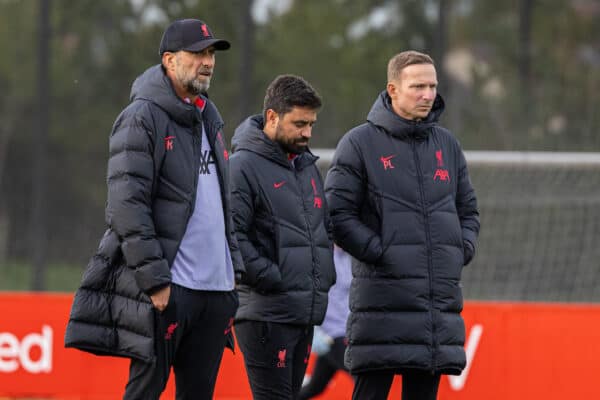 Just two games into his new-look 4-4-2 system, Jurgen Klopp has admitted he may now scrap it having lost “one important part of it” due to injury.

In the buildup to Liverpool’s trip to Arsenal, Klopp explained the need to be “unpredictable,” having debuted a new 4-4-2 formation in the 2-0 win over Rangers in midweek.

An hour before kickoff at the Emirates, the teamsheet confirmed no changes to his side from the win at Anfield, with Darwin Nunez and Diogo Jota up front again.

However, it was less successful than five days previous, with a goal from Gabriel Martinelli and a Bukayo Saka brace consigning Liverpool to defeat in the capital.

Their misery was compounded by two serious injuries in the opening 45 minutes, with Luis Diaz and Trent Alexander-Arnold both forced off ahead of scans this week.

According to Klopp, the loss of one of those two players could force another tactical rethink, as he insisted that there were no issues with the system despite Liverpool’s performance.

“I think the goals we conceded had nothing to do with the system,” he told reporters.

“Did we have to get used to it a little bit more? That’s normal as well.

“Can we play it again? I don’t know, because we lost today one important part of it. So we have to see who is available for the next game.

“Do I have deeper concerns? Yes, of course I’m not happy, how can I be? We are neither in a mood for jokes nor happy.

“We are in a tough moment and we want to get through this together. That’s what we are working on.”

Though the manager did not specify which injury he was referring to, it is more than likely Alexander-Arnold’s given his unique quality and the long-term reliance on the right-back.

Joe Gomez took his place at half-time but is not the same type of player, while Calvin Ramsay was not even part of the squad after recovering from a long-term back injury.

Either Gomez or James Milner are expected to fill in for Alexander-Arnold when the Reds visit Rangers on Wednesday night, with the 4-4-2 arguably more feasible if Milner is the starter.

Klopp may have been referencing Diaz’s absence, however, with the Colombian’s knee injury limiting options for the four attacking roles.

Mo Salah and Roberto Firmino remain available along with Jota and Nunez, while Fabio Carvalho and Harvey Elliott could also be considered as more advanced midfielders.