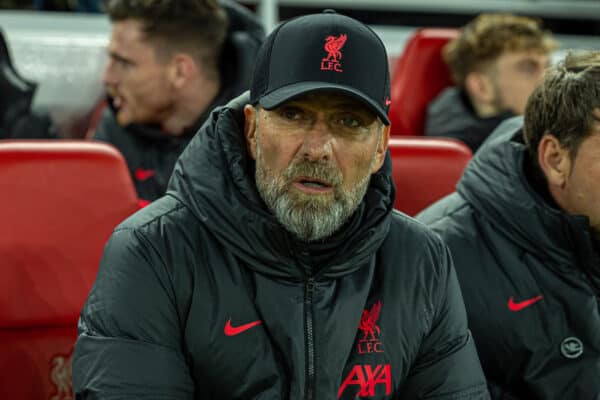 Jurgen Klopp will not be handed a touchline ban following his sending-off against Man City, but he has been served a £30,000 fine.

The manager was officially charged by the FA last week for his late dismissal in the victory over Man City, with his actions described as “improper.”

A response was required to the charge prior to the trip to Nottingham Forest, leaving Klopp not “100 percent” sure if he was to be allowed on the touchline.

No ban was forthcoming before the match and will not be forthcoming at all, meaning he is free to be on the touchline against Leeds on Saturday and so forth.

A one-game ban was expected due to the nature of the charge but after a hearing, it has been confirmed Klopp has just been handed a £30,000 fine after accepting his behaviour was “improper.”

The sanction is subject to appeal from Klopp or the FA after the independent Regulatory Commission’s written reasons are received.

Klopp was quick to admit his fault in his actions on the touchline after the win against Man City.

“Of course, red card, my fault. I went over the top in the moment,” he said.

“I don’t think I was disrespectful to anybody, but when you look at the pictures back, I know myself, at 55 years, the way I look in these moments is already worth a red card – who cares what I say.

“I lost it in that moment, it’s not OK. But I think, a little bit as an excuse, I would like to mention: how can you not whistle that foul?”