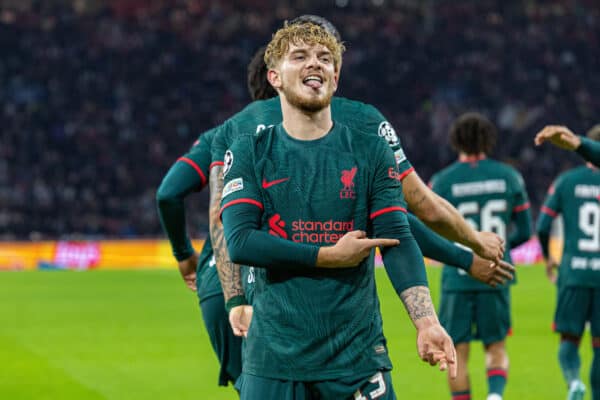 Taken apart in Naples on the opening night, it shouldn’t have been as simple a task as clinching a place in the knockout stages of the Champions League with one game to spare, but here Liverpool are.

Napoli – unbeaten and currently sat atop of Serie A – will come to Anfield next Tuesday as a team who have won five out of five, scoring an average of four goals a game, with no fewer than three goals scored in any one of those five fixtures.

Yet as unlikely as it is, a mad set of events could still see Jurgen Klopp’s side finish top of Group A.

Stubborn at home, better on the road than at Anfield since losing in Campania, Liverpool’s Champions League campaign thus far has been very different to their saccadic Premier League efforts.

Of course, Ajax and Rangers have played into Liverpool’s hands to a large extent, in a group that sounded stronger when being drawn out of giant UEFA fishbowls than it has proved to be on grass.

They might have come to within a penalty shootout of winning the Europa League last season, but this is nowhere near the Rangers of 1992 when they were outwitting the best English football had to offer, while Ajax didn’t only lose their manager, they also largely sold the family silver in the summer.

As the adage goes, though, you can only beat what’s in front of you, and in Amsterdam, after weathering the early enthusiasm of the home team, Liverpool never really looked like tripping up in this one, once they finally found their range.

It might have been a different evening had we indulged in conceding the opening goal yet again when Steven Berghuis insisted upon striking Alisson’s left-hand goalpost when it seemed easier to hit the back of the net, while Trent Alexander-Arnold later did a pretty good impression of the type of defensive acumen that is widely said to be beyond him.

What Liverpool did was wrestle away from Ajax the right to dictate the pace of the game. When the tempo was high during the first 30 minutes or so, we were at our most vulnerable, yet from here, as Klopp’s side started to retain possession for longer, they counterpunched with devastating effect, and the hosts had no answer to it.

Many teams that Liverpool face, who aspire of taking something from the game, have hit upon an approach of trying to out-Liverpool us. Press high, force the pace, up the tempo, hunt the ball in packs, and take advantage of indecisiveness. Imitation as innovation, we should take it as a compliment.

As we search for greater rhythm and consistency we’ve had to adapt. In textbook terms, the Liverpool formation at the Johan Cruijff ArenA was something akin to a 4-1-2-1-2, with Mohamed Salah more central again.

Jurgen Klopp later described it as a 4-4-2 with a diamond midfield.

Within this, Salah gets less time on the ball, and as Bobby Firmino drops deeper, at times it is almost as if he is partnering Fabinho in central midfield when we are in possession, with Jordan Henderson and Harvey Elliott pulling into wider areas.

It was such a scenario that broke the deadlock, as the captain played a magnificent ball to Salah that was beautifully dispatched with one delicate touch.

In wider terms, Liverpool undeniably aren’t at the top of their game, and when that happens you can’t just keep running up the same cul-de-sacs.

Within the remit of his time at Liverpool, this has put Klopp into new territory, as he now approaches each game with the need for a bespoke system that probes for opposing weaknesses, whereas when we were riding the unstoppable wave we were sweeping all aside with a uniform shape that nobody could cope with.

At such a peak of form, Klopp might have only had to approach half a dozen or so games a season with an alternative idea. At the minute, it’s a twice-weekly need. Hence, we came unstuck at the City Ground last Saturday when attempting to ‘phone it in’.

We can’t do that, and as a result, footballing business was taken more seriously in Amsterdam than it was in Nottingham, and we got our reward.

Work ethic is everything for us right now, and more of it will be required on Saturday night at home to Leeds.

Darwin Nunez had another trademark mad night of it against Ajax. He outdid Berghuis’s profligacy shortly before halftime when hitting the foot of Remko Pasveer’s post, with the goal at his mercy.

There was some poor amateur dramatics when minimal contact was made to his face, but then he used his immense power to procure an excellent second goal from an Andy Robertson corner early in the second half, laying the steppingstones to Liverpool killing off the game before the hour mark.

He could do with knocking off the Pob impressions when scoring though.

These two opposites aren’t game-to-game occurrences, though, they can lie within a span of a short few minutes. Essentially, he’s a footballing Baby Yoda.

It was Elliott who dealt the final blow to any Ajax pretensions of getting back into the game, with a wonderful run into space and emphatic finish. Almost as warming to the soul was the velocity of his celebration. It spoke of a determination that we currently need more of as a collective.

Victory in Amsterdam means that Liverpool’s season will maintain a high-octane interest until at least the first week of March and that the visit of Napoli will represent a free swing at improving the wider mood music of the campaign.

While topping the group is always valuable, that game should be about soothing some of the pain that was inflicted upon us in Naples, rather than trying to win the group. Besides, when we win the Champions League, we win it by finishing second in the group stages.

Leeds come next though, and our fortunes will be dictated by avoiding the urge to ‘phone it in’.