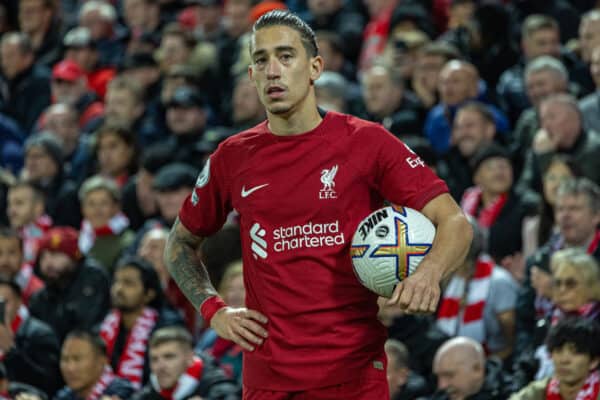 Kostas Tsimikas recorded his fifth assist of the season and his 11th for Liverpool as he set up the winner against West Ham, topping a 30-year chart.

A surprise starter coming in for the fit-again Andy Robertson, Tsimikas showed his worth with a perfect cross for Darwin Nunez to head in at Anfield on Wednesday night.

In doing so, the Greek marked his fifth assist of the campaign, with only Kevin De Bruyne (11) laying on more in all competitions among players from the Premier League, according to Opta.

Opta’s Michael Reid later revealed that, of players to assist 10 or more goals for Liverpool since 1992/93, none have a better average of minutes per assist than Tsimikas:

Best mins/assist rates in all comps for #LFC in the Premier League era (10+ assists since 92-93):

The list is, of course, skewed given those in the top three – Tsimikas (11), Jermaine Pennant (17) and Vlad Smicer (31) – teed up considerably fewer than the likes of Trent Alexander-Arnold (61) and Steve McManaman (85).

But it shows the strong start the left-back has made since establishing himself as a dependable option for Jurgen Klopp.

This season, only Diogo Jota (five) has laid on as many goals for Liverpool as Tsimikas, with Mo Salah (four), Roberto Firmino (four), Robertson (three) and Luis Diaz (three) the only others to assist more than once.

Alexander-Arnold is still waiting for his first official assist of the campaign.

Speaking to LFCTV after the game, Tsimikas expressed his delight at setting Nunez up for a landmark goal, and explained how he works “every day” to improve his crossing.

“It’s a very good moment for me, especially because the goal was a cross for Darwin. I wanted to assist him,” he said.

“I’m very, very happy for him, because I know he wanted to score also.

“Obviously he could score more goals, but hopefully he keeps his headers in the goal for the next games.

“I’m very, very happy for that. Every day I work on it, to make better crosses and to have better performances.”