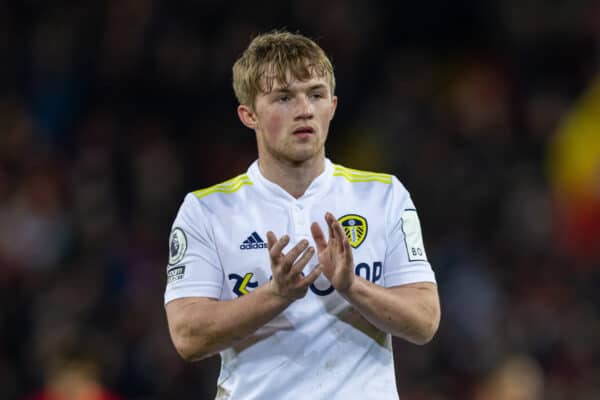 Leeds could be without 8 senior players for Liverpool trip

Leeds not only arrive at Anfield on Saturday without a Premier League victory since mid-August but also with injuries and fitness doubts for eight different players.

If anyone can sympathise with that, it’s Liverpool.

Jurgen Klopp has been without 19 different players throughout the season so far, with only eight players avoiding any issue in the 16 games played to date.

And while the Reds will be hoping Thiago will be back in the mix, with Ibrahima Konate, Alex Oxlade-Chamberlain and Naby Keita also vying for a place on the bench, Leeds are left to cross their fingers.

Jesse Marsch is under pressure and ahead of the trip to Anfield on Saturday night, revealed two players are still ruled out and another six are “questionable.”

“In addition, questionable are Leo Hjelde, after his appendectomy, and then Joffy [Gelhardt], Rodri [Rodrigo], Luis [Sinisterra], Liam [Cooper] and Tyler [Adams] are all a little bit in question.”

Ordinarily, four to five of those players would be in Leeds‘ XI, namely Rodrigo and Sinisterra – who have combined for seven of their 13 league goals this season.

With Liverpool a formidable opponent at Anfield and the pressure firmly on Marsch’s shoulder, it’s far from ideal if you are of the Leeds persuasion.

Saturday’s visitors have lost four games in a row and last collected three points in August, against Chelsea, with two draws and six defeats following.

Klopp’s side can afford to show no mercy, though, with a fifth win of the league season non-negotiable.