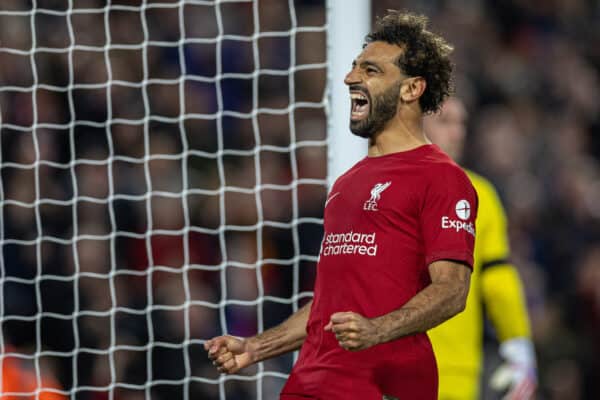 Liverpool 2-0 Rangers: Player Ratings – What the media and statistics say

Trent Alexander-Arnold returned to form and stood out in Liverpool’s 2-0 victory at home to Rangers on Tuesday evening.

The Reds hosted the Scottish giants in the Champions League, with anything other than a victory unacceptable.

Alexander-Arnold silenced his critics with an inch-perfect free-kick to give Liverpool the lead, with Darwin Nunez also denied many times in the first half.

Mohamed Salah buried a penalty after the impressive Luis Diaz was fouled, as Jurgen Klopp‘s side recorded a routine win.

It was Alexander-Arnold (8.1) who got the best rating at Anfield, on a night that outlined how much quality and strength of character he has.

The 23-year-old has had a tough season to date, earning plenty of criticism, but he shone in all facets of his game against Rangers.

The Echo‘s Ian Doyle described Alexander-Arnold’s free-kick as “beautiful,” adding that he was “defensively solid.”

Meanwhile, FotMob had him as their star player, making a whopping 11 recoveries and winning both of his aerial duels.

In second place were Thiago (7.8) and Mohamed Salah (7.8), with the pair both playing their part in the win.

The former produced a typically accomplished midfield showing and TIA’s Mark Delgado hailed one “great sliding challenge” in the second half.

Salah’s took his penalty with aplomb and was a willing runner all night, completing his one attempted dribble and making one interception for good measure.

Diaz (7.7) was in third place, winning the penalty and causing Rangers’ defence nightmares at times.

Doyle felt the Colombian “hounded” the visitors throughout, while Delgado said his pace proved to be “unstoppable.”