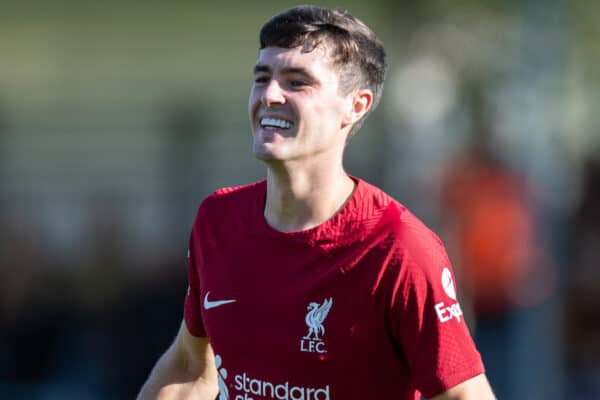 Layton Stewart brought his tally to six goals in nine games with a hat-trick against Wolves, with Liverpool under-21s coach Barry Lewtas warning he is “not there yet.”

It has been an excellent start to the season for Stewart, who missed the majority of the last campaign with an ACL injury, recovering well to take up a first-choice role.

The 20-year-old has trained with the first team at the AXA Training Centre, while starting nine of a possible 10 games for the U21s across league and EFL Trophy.

His only omission came due to a red card picked up in a 1-1 draw with Brighton in August – a game in which he scored a late equaliser – with Lewtas relying heavily on his No. 9.

But the U21s coach believes Stewart is yet to reach full sharpness, despite having scored six and assisted three more already this season.

“He has trained ever so hard after his long spell on the sidelines. He is not there yet, but he is getting sharper and sharper.”

On Stewart’s treble in Saturday’s 5-0 win over Wolves, he added: “They were three brilliant goals…it was a nice hat-trick, certainly.”

Stewart is currently averaging a goal or assist every game in the academy, with only under-18s regular Lewis Koumas producing a better return so far.

It is an encouraging start for a player who will be hoping for chances in the senior setup as the campaign wears on, with injury to Luis Diaz potentially opening a door for the League Cup clash with Derby on November 9.

Jumping the mental hurdle has been as crucial as any physical barriers post-injury, with Stewart himself reflecting on a goal that “meant a lot” following his long layoff.

“That meant a lot to me, it was my first goal on this pitch since I got my injury so that was a big one for me as I’ve been thinking about that a lot,” he told LiverpoolFC.com.

“Each game I play, each training session I’m getting my rhythm back and getting sharper.

“It was a good day, to score the hat-trick, the lads were brilliant and it was a great team performance.”

Stewart only turned 20 in September, and is contracted to Liverpool until 2025.