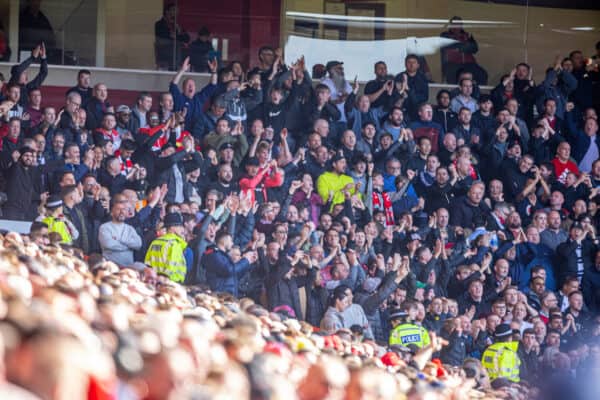 When will enough be enough? When will consistent education be served up for those who consciously choose to recite vile chants? As currently, the silence is just as loud.

There was something entirely predictable about the game at the City Ground. A couple of wins do not guarantee a return to an all-encompassing form; you must earn the right to ‘phone it in’ and Liverpool aren’t in a position to indulge in such behaviour yet.

What was also sadly inevitable was the verbal diarrhoea that was sung by a highly audible percentage of the home support.

When you can clearly hear provocative songs about the deaths of human beings within football stadiums, alongside accompanying poverty ballads, often within communities that are among those with the highest deprivation levels in the country, and on this occasion by supporters who Liverpool were drawn to Hillsborough to face in the 1989 FA Cup semi-final, then the silence of those employed to describe the game is just as loud as the offensive songs and chants being aired.

Within the dust of Liverpool beating Man City a week ago, there was reputedly a muted private apology sent along the East Lancashire Road. Nothing publicly stated you understand, just a bit of in-house Premier League Productions lip service, muted all the further by carefully shielded insinuations of racism.

Akin to when a national newspaper creates a splash, incendiary front page headline story, only to offer a ‘fulsome’ one-paragraph apology six months later at the foot of page 37.

It represented the reluctant – barely visible – gift of concession to the c**tish misbehaviour of their increasingly obnoxious fanbase with one hand, only to swiftly offset it with a sly dig to the ribs with the other, which was designed to draw attention away from Jurgen Klopp having pointed out the blunt truth of City’s financial advantages.

There is a landscape in the UK – not only in terms of football – in which some individuals and collectives want to act the bastard but then protest about their actions being pointed out to the audience.

Free speech and expression are, of course, crucial, but there also comes great responsibility associated to it. The audience will believe whatever they choose to before it has even been said.

They are the scriptures of football supporter pantomime and tribalism. New generations will only get worse, as they try to fit into the existing landscape. It’s all about acceptance. When the herd moves and all that.

‘Always the victim’ has become a widespread slogan to incite. For a long time, it was only a soundtrack that was boomed out by the supporters of a team that resides in Salford, but like a cancer, it has spread, via the rise to great success of their noisy neighbours, and onward to anyone who fancies being ‘a bit edgy’, in a conformist sort of way.

'Always the victims' for the third time from the Forest fans.

It still jars when you hear it from previously unexpected directions. Along with quite a few others, Leicester, West Ham, and Nottingham Forest supporters have all partaken in rasping it out in relatively recent times.

It’s only right that we take them to account for it. Act the bastard all you want, but the ramifications should be them being outed for it.

What shouldn’t go forgotten, however, is that not everybody subscribes to the herd though. There are some powerful and learned voices at every football club. They just need to make those voices heard more often, to encourage other similar souls to speak out too.

More must be done

Football media needs to do more though. I’m positive there are rules that are handed down to football commentators and those from upon high that they not make mention of Hillsborough chants.

There is uniformity in how they are dealt with. Silence descends in the commentary box so as the songs and chants come through loud and clear. I’m sure for some commentators it is their way of a silent protest to illuminate what is being sung, bound as they are by the restrictions of their superiors.

This approach isn’t going to educate the masses though. In a world of contemporary ‘banter’ being acceptable currency, the only language that the perpetrators will understand is having their abhorrent behaviour pointed out.

Within this, the vicious circle simply gains in velocity. They seek a reaction from us, and they obtain one. Along comes the next occasion and we rinse and repeat.

A topic that shouldn’t be divisive is being fought over in a divisive nation. The outcome is clear and basic hate speech needs calling out when it occurs, but for whatever reason, there is a collective silence from the authorities and the broadcasters.

This is because those who are voicing these chants and songs aren’t just supporters of football teams, but they are Premier League customers and consumers. The mothership of the Premier League cannot be seen to reprimand those who pour money into their accounts hand over fist.

Rightly, Hillsborough will always be a raw topic for us, something that has only been stirred again after the events outside the Stade de France in May, since which three Hillsborough survivors have taken their own lives, having also being present at the Champions League final.

Personally, it is only in recent weeks that I have begun to emerge from the cloud of my own experiences in Saint-Denis.

Accountability is everything, and if the authorities and amplifiers of the Premier League and UEFA beyond them won’t stand up to meet the requirements of their duties, then as is always the case, we will just have to do it ourselves.