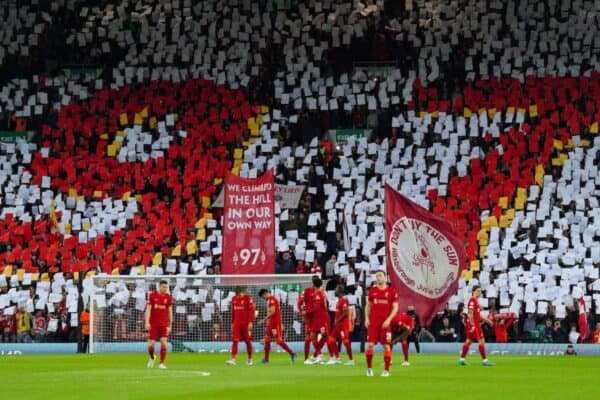 Liverpool West Derby MP Ian Byrne has contacted the Premier League in a bid to clamp down on vile Hillsborough chanting from opposing fans.

It has been a growing and increasingly sad trend during Liverpool games, particularly at Anfield, for opposition supporters to chant about Hillsborough.

‘Always the victims’ can now be heard at almost every game, with the level of abuse from Man City fans during the recent meeting leading to a public statement from the club.

That was followed up by similar chants during the clashes with Nottingham Forest and Leeds, the former coming despite Forest fans having also been in attendance at Hillsborough as the tragedy unfolded in 1989.

Byrne, who serves as Labour MP for Liverpool West Derby, has now shared a letter he sent to Premier League chief executive Richard Masters and LFC counterpart Billy Hogan, condemning the chants and calling for help in educating fans.

I have written to @premierleague to ask for an urgent meeting about obscene chanting about Hillsborough at matches and their duty of care to families and survivors. I would welcome their backing for our Real Truth Legacy Project and look forward to making the case. #JFT97 pic.twitter.com/jb5LVTMrHI

“I am writing to you with a heavy heart today as once again a Premier League football match has been marred with the continuous chants of songs about the Hillsborough disaster, these chants and the people behind them shame the game.

“Since the events of the UEFA final in Paris we have seen many survivors triggered and struggling. Tragically three survivors have taken their own lives this year alone and two since Paris.

“The Premier League has a duty of care to these supporters and the incessant chanting that is now a weekly occurrence must be tackled at the root causes.

“In my capacity as Member of Parliament for Liverpool West Derby constituency and as a Hillsborough survivor, I am leading an initiative called the Real Truth Legacy Project.

“Working with Hillsborough survivors and some of the families of the 97 fans who lost their lives due to the disaster, we aim to educate current and future generations about what really happened at the disaster, and about the subsequent cover-up and the long fight for justice.

“Education of future supporters is the long-term aim of the Real Truth Legacy Project, to eradicate any ignorance and ensure that future generations are given an understanding in school of one of the biggest miscarriages of justice our country has ever seen.

“Since the most recent Premier League match against Manchester City, which was again punctuated by chants around Hillsborough, I have written to the Secretary of State for Education to once again request that this be included in the National Curriculum.

“It is apparent that we need to work with supporters across the country now and I am therefore requesting that you meet me to discuss the Real Truth Legacy Project and the other strands of it that I have been working on creating a tool kit to be used by groups and organisations.

“I cannot stress the detrimental impact these chants are having on the families of the 97, the survivors and their families.

“Enough really is enough and we need actions now from the Premier League and all football clubs involved to ensure that this stops.”