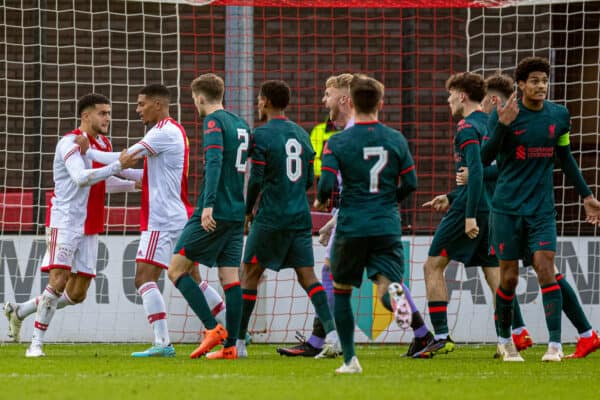 Only needing a point to book their place in the UEFA Youth League last 16, Liverpool were unable to overcome Ajax in a fiery 3-1 loss in Amsterdam.

Injuries, suspensions and first-team call-ups limited the young Reds’ squad – with Harvey Davies, Lee Jonas, Isaac Mabaya, Stefan Bajcetic and Oakley Cannonier all out for various reasons – it was a mixed Liverpool side that lined up in Amsterdam.

That included a makeshift left-back in Dominic Corness, and it was perhaps no surprise that the attacks flowed down his side as Ajax looked to exploit his lack of experience.

Their breakthrough came after just 15 minutes, with an overlapping run allowing for a cross which Jaydon Banel turned in, depriving stand-in goalkeeper Luke Hewitson a clean sheet.

Ajax had a big opportunity to make it 2-0 just before the half-hour, with the chance again coming from the now-booked Corness’ flank, a goalbound effort only kept out by a Jarell Quansah block.

Their second did come before the break, though, and unsurprisingly it was another low ball in from the left that crafted it, Gabriel Misehouy handed a simple finish.

But the dazzling Ben Doak still threatened on the right, and after teeing him up for a blocked shot earlier in the half, the Scot laid on a header for Trent Kone-Doherty to reduce the deficit on the cusp of half-time.

Liverpool were certainly improved after the break, but the game descended into fury after the hour, in the aftermath of a goal from Ajax substitute David Kalokoh.

Melkamu Frauendorf and Bobby Clark were clearly incensed by Oualid Agouigil, with punches thrown and Barry Lewtas protesting his players’ innocence in the incident that sparked it all, while the referee saw fit to only show two yellow cards.

Lewtas responded by pushing Frauendorf and Clark into more advanced positions, looking to capitalise on two of his best players being galvanised by the situation, and the relentless German was heavily involved late on.

There were chances for Frauendorf, in particular one taken off his foot by Lewis Koumas that would almost certainly have been a goal, but the young Reds flagged as the minutes wore on.

They will need to wait until the final day, then, to guarantee their spot in the last 16, with another opportunity to pick up the result needed at home to Napoli.