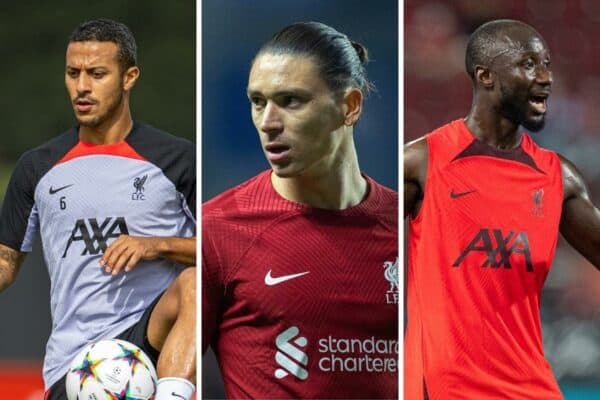 Liverpool were forced to be without a further two senior players at Nottingham Forest, but just what does the current injury list look like for the Reds?

It’s consistently been one step forward and two back for Jurgen Klopp‘s side where injuries are concerned, as was witnessed over the weekend.

Just eight senior players have avoided any issue so far, while a total of 19 have all succumbed to one issue or another to miss a combined 119 games – and counting.

There are three names on the long-term injury list and five others that Klopp will be eager to use before the World Cup break in just 19 days’ time.

So what is the latest on those currently sidelined?

Injury: Hamstring
Out since: October 19
Expected return: Ajax (A)

After scoring the winner against West Ham and with momentum on his side, it was typical Liverpool misfortune that saw Nunez end the match with a minor hamstring complaint.

It was enough to rule him out of Saturday’s fixture but Klopp was optimistic that it will be a one-game absence.

“Darwin should be back, this game was just too early,” Klopp said on Saturday. “I think another day of recovery would have helped him. At least that is my knowledge in the moment.”

Injury: Ear infection
Out since: October 22
Expected return: Ajax (A)

An ear infection on the morning of the trip to Forest sent Thiago to the hospital before he was later driven home, with the issue enough to keep him out of the match.

The hope is he will have recovered in time for Wednesday’s trip to Ajax.

Injury: Muscle
Out since: October 12
Expected return: Ajax (A)

Konate has missed Liverpool’s last three games with a muscle injury but the manager did confirm that “Ibou will train” from the start of the week.

With his time out extending to ‘just’ two weeks, there should be little concern about injecting him straight back into the team. An extra body in defence will be welcomed.

Injury: Thigh
Out since: August 21
Expected return: November, now back in full training

Keita has played just five minutes this season but is now back in full training, but there will be no rush on his return to the pitch as he first needs to get match fit.

“His pre-season, if you want, football pre-season starts then, more or less,” Klopp explained.

“There are a lot of football games to play and I can’t wait to have him back properly.”

What was initially said to be a two to three-week return timeline now appears slightly longer for Matip, with Klopp’s last update, pre-West Ham, saying he is “still a little bit away.”

It is Matip’s second injury of the season having missed three games earlier in the campaign with what was described as a “strange” injury.

He will surely be expected to return before the World Cup break.

Injury: Knee
Out since: October 9
Expected return: After World Cup

There was no surgery required for Diaz’s knee injury, leaving a recovery schedule of six-to-eight weeks.

He will be pencilled in for a return against Aston Villa after Christmas with the hope he can get back up to speed during Liverpool’s World Cup break in Dubai.

Injury: Calf
Out since: October 16
Expected return: After World Cup

A serious injury for Jota has led to World Cup heartbreak, with his calf injury keeping him out of action for the foreseeable future.

There is no definitive timeline but that Klopp said “we will wait for him like a good wife waits for her husband in prison,” doesn’t bode well.

He has used the phrase for serious long-term injuries in the past, but Reds will be hoping the No. 20 is the exception – but either way, he will not be seen until 2023.

The first half of his season ended before it ever got up and running and the severity of his injury required surgery, which is to keep him sidelined for anywhere between three to four months.

Another Red not to see any minutes until 2023.