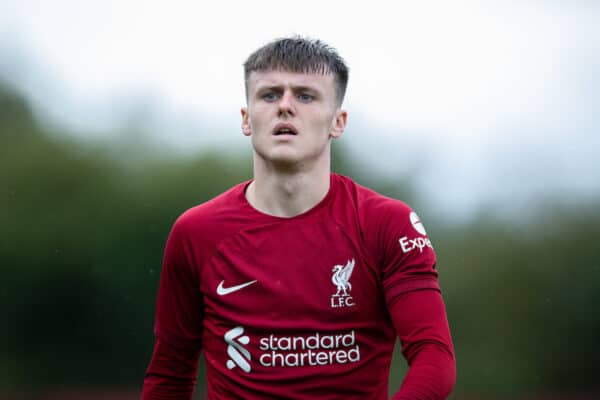 Ben Doak enjoyed a perfect week after stepping up with the Liverpool under-21s, but the club will remain careful with the 16-year-old’s development.

It was two goals in five days for Doak as he makes his first forays into U21s football with the Reds, having already shone with the under-18s this season.

Called up to Barry Lewtas‘ squad for a 5-0 win over Wolves earlier in the month, the Scottish winger then came off the bench to set up one and score another in a 3-2 loss to League One side Accrington Stanley on Tuesday night.

The teenager then followed that up with a first start in the mini-Merseyside derby at home to Everton on Saturday, netting the winner in a 2-1 victory.

Doak now has eight goals and five assists in 12 games with the Liverpool academy, making a stunning start after his £600,000 move from Celtic in the summer, raising hopes of a swift rise.

But speaking to the Liverpool Echo, U21s coach Lewtas has explained that the youngster will still be considered an U18s player for now.

“We’ve got quite a few lads missing at the moment so it’s a real opportunity for the younger ones. [Against Everton] he was certainly one who stepped up,” he said.

“He’ll be flitting between the two age groups, he is still only young.

“At the minute we have got a few lads injured and a few with the first team.

“He’s still a youth-teamer but when he comes up and trains with us, we’ll see where he goes from there.”

Layton Stewart and Oakley Cannonier both missed the derby due to injury, while Bobby Clark was with the first team and Harvey Blair also sat out, leading to Doak starting alongside Melkamu Frauendorf and Mateusz Musialowski.

But while his involvement came largely due to circumstances elsewhere, the Scotland under-21 international has made a strong case to keep his place in the future.

Having arrived after making his senior debut against Celtic, there is a sense that Doak is ahead of most other players his age when it comes to his development, though a first-team place is still a way off.

However, with Lewtas explaining that academy medical staff will “have to go week-to-week” when it comes to Stewart’s ankle injury, there is every chance he stays with the U21s for now.

They are next in action on Saturday evening, with a trip to West Ham in the league.