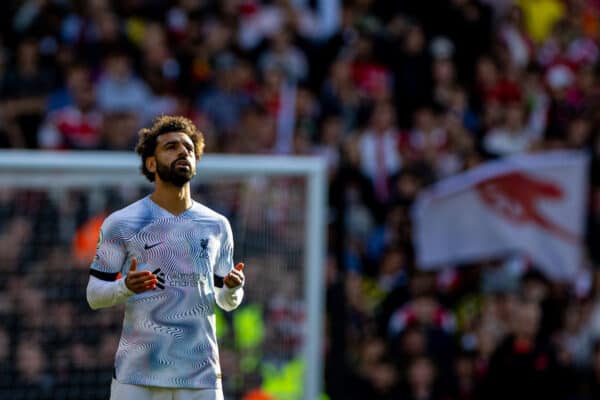 There was lots of criticism for Liverpool after their lethargic 3-2 defeat away to Arsenal, as the Reds’ crisis becomes bigger by the week.

Jurgen Klopp‘s side were poor at the Emirates, despite scoring twice, with their performance one we have seen so often this season.

Liverpool were far too easy to get through, conceding three times in sloppy fashion, and the defeat leaves them mid-table in the Premier League.

Here’s how the media reacted to the Reds’ loss.

It was another hugely below-par showing…

The Independent‘s Miguel Delaney felt the Reds were deserved losers:

“What was beyond doubt was that Mikel Arteta’s side ultimately made far fewer mistakes than Liverpool – and generally looked a much better side – to fully deserve a rollocking 3-2 win.

“It means that Arsenal can continue to believe they will challenge for a title, with eight wins from nine and this – at least notionally – the biggest victory yet.

“So many different parts of the team seem disconnected, in a way that just hasn’t been the case for Klopp’s fully-functioning unit over the last half decade.”

Ian Doyle of the Liverpool Echo felt it was the same old problems again:

“A second Premier League defeat of the season – leaving Liverpool with a miserly 10 points from eight games, their worst such start to a campaign in a decade – is problem enough.

“But the real concern was the manner of the loss, those watching at home able to tick off the list of increasingly regular failings.

“Concede the first goal early? Check. Fail to put pressure on the opposing side? Check. Drag themselves back into the game only to throw away any chance of momentum? Check.

There was criticism for Trent and Salah…

This Is Anfield‘s Mark Delgado was unimpressed by Trent Alexander-Arnold‘s performance:

“It was another tough outing for our No. 66, with both Arsenal‘s two goals at the start and end of the first half coming via his channel.

“The first wasn’t his fault: we’ve covered already the lack of midfield tracking and it was a great pass between defenders, with Trent very narrow already. If he was even closer to Matip, it’s an easy pass outside him.

“For goal number two it’s a different matter: Trent and Henderson had to, between them, block off Martinelli. It’s basic stuff: One goes beyond to track the sprint if he tries to hit the byline; the other holds to block off a cutback onto the right foot.

“They both went instead, and left a massive gap.”

The Mirror‘s Mark Jones bemoaned another off day for Mohamed Salah:

“It was partly to do with Tomiyasu’s performance, but this turned into below par outing for Salah, the player who has been impacted the most by the Liverpool changes.

“The Egyptian didn’t really get a sniff at goal all game, and he can have no complaints with being taken off when he did.

“It would cover a multitude of sins for this Reds side if he was firing, but he looks way off it.”

The Telegraph‘s Jason Burt also focused on the out-of-sorts pair:

“Liverpool sit in 10th place, they have won just two of their eight league games and are an astonishing 14 points behind Arsenal.

“Even at this early stage it appears insurmountable as they lick their wounds following their worst start – with just 10 points – under Klopp and, in fact, for a decade.

“There will be even more scrutiny on Alexander-Arnold, and whether he was at fault for Arsenal’s two first-half goals, but he was not the only one to disappoint.

“Mohamed Salah was also substituted and can have no complaint. He looked out-of-sorts and his glum expression said it all.”

Delgado believes Klopp has a massive job on his hands:

“Klopp has a huge, huge job to do over the coming week.

“He can say all he wants that things were close, or getting better, or whatever. The truth is we’re miles off it at the moment and the top four is the minimum allowed, and we’re even way off that.

“Whatever tactical shape we use next week, it better be much improved out of possession or it’s going to get very messy.”

Doyle feels numerous problems have led to this situation:

“In truth, with a shortened pre-season, the need to mould a new-look attack and the obvious mental and physical exhaustion from last term’s heroic quadruple effort meant a concerted challenge up against an Erling Haaland-strength Manchester City was always going to be a stretch.

“But Liverpool now stand 14 points behind early leaders Arsenal. On the evidence here, the Gunners don’t have enough to bother City in the long run.

“Champions League qualification, though, is now a very realistic aim, with Klopp’s side now having to play significant catch-up on not just Arsenal all their main rivals to secure the minimum aim of a top-four finish.”

Finally, Delaney believes there are real issues for Klopp to sort:

“There’s just now the question over whether a win over Liverpool means the same, because Klopp has to face up to whether there is more wrong with this side than the formation or form.

“For Liverpool, far from flawed perfection, it’s a perfect storm of problems. Something feels broken, disconnected, and the most galling thing is the questions that will inevitably come over Klopp’s responses – whether he even knows how to respond.”