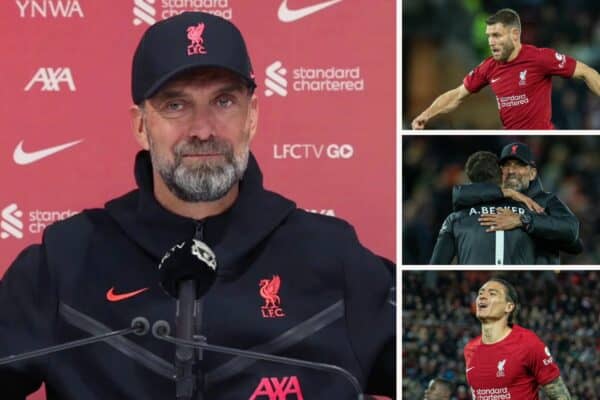 Jurgen Klopp was in good spirits after Liverpool beat West Ham 1-0 at Anfield on Wednesday, with a reference to James Milner‘s big toe, details on his decision to take off Darwin Nunez and more.

Here are three key points from the boss after the Reds secured their second Premier League win on the bounce:

That’s right, without Milner’s big toe, there’s every chance Liverpool wouldn’t have come away with three points on Wednesday!

West Ham‘s Tomas Soucek looked certain to level the scores in the closing stages when the ball fell to him in the box, only for a last ditch tackle from substitute Milner and a save from Alisson to deny him.

Klopp acknowledged that his side didn’t play as well as they could have in the second period, but it was all about grinding out the result.

“We didn’t play that well in the second half, that’s why the game opened up,” he said.

“We had our moments, obviously, but in general, we didn’t play enough to control the game…

“In the end, we needed Ali, we needed Milly’s big toe, we need a couple of things, but overall I think it’s a deserved three points.”

No risks with Nunez

Some eyebrows were raised when Klopp made the decision to withdraw Nunez just before the hour mark.

After scoring his first Anfield goal for the Reds, the Uruguayan was a constant threat, and you got the feeling more goals could come his way in the second half.

Klopp explained how Nunez felt muscle fatigue at half-time, with the Liverpool boss keen not to take any risks with the striker given the other injury issues in the squad.

“He felt a little bit the muscles at half-time, but (everyone said) ‘it’s all fine, it’s all fine’, but after five minutes already I was just too concerned,” Klopp told reporters.

“There were long sprints for him and balls where he stretched his leg, so I thought ‘come on, we cannot take that risk’, that’s why we changed…

When asked if Nunez’s complaint could be a concern for the coming matches, Klopp said:

Klopp has been lamented for his comments about the wind impacting games in the past, but it still doesn’t stop him from bringing it up, and rightly so!

On an extremely windy night at Anfield, the boss explained how the conditions made West Ham‘s direct balls even more difficult to defend in the second half.

Thankfully, the Reds emerged from the game with another clean sheet and another three points.

“I know people hate when I mention the wind, but it makes a football game really tricky!

“The ball is in the air and you could see a few moments when these long diagonal balls where everybody expected Trent to get the ball and then in the last second the ball gets a little push and it goes wide, and there’s a one-on-one situation with Benrahma, who is obviously a pretty good dribbler!”