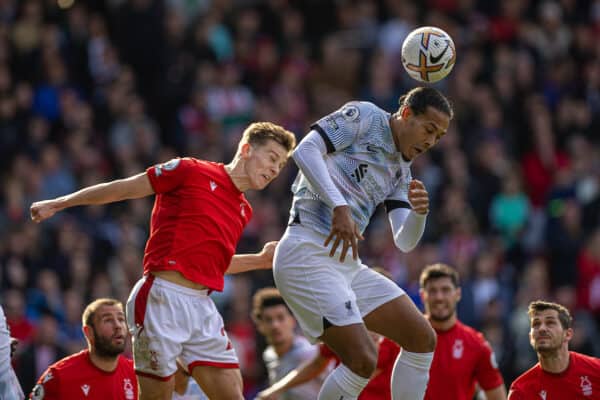 A putrid Liverpool were beaten 1-0 away to Nottingham Forest on Saturday, with Joe Gomez in particular having a nightmare afternoon.

Alisson has been outstanding again this season and this was another superb outing for him. Quite where Liverpool would be without a goalkeeper of his quality this season is extremely worrying.

He was a bystander for much of the first half, barring a couple of routine saves, and he could do nothing about Taiwo Awoniyi‘s goal.

Then made one magnificent save late on to deny Yates, having already made two more smart saves to keep it at 1-0.

That the goalkeeper was man of the match in a defeat to the bottom-of-the-table side says it all about how abject this team performance was.

Milner has enjoyed a strong couple of performances and he started over Trent Alexander-Arnold at the City Ground.

The veteran again largely did fine, playing one superb long ball to Mohamed Salah early on and providing a cross that Virgil van Dijk should have scored from. Made a key block at 1-0, too.

Still, he’s not Trent, and it showed.

Gomez continued at centre-back after a good run, but this was a desperately poor performance from him.

Two sloppy misplaced passes before half-time summed up his lethargic approach and he always looked susceptible on the counter-attack.

It was him getting robbed, and booked, that led to Forest opening the scoring from a free-kick – on this evidence, he’s easily fourth-choice.

Van Dijk has looked back to near his best of late but he was nowhere near good enough here.

There was another one of those strange, lazy, backheel attempted clearances for the goal.

He also missed all three of the Reds’ best chances, one in the first half and two late on. The latter being an absolutely unmarked header off a corner that should be his bread and butter.

Robertson returned to the starting lineup after a midweek breather, but he was extremely quiet in an attacking sense.

As is the norm, the Scot was decent defensively, but he really struggled to link up with Fabio Carvalho and often took up a deeper role.

Fabinho looked miles off the pace against West Ham when he came on, so this was a big afternoon for him in Nottingham.

This was again forgettable stuff from the Brazilian, who was somewhat neat and tidy in possession but still miles from the all-conquering midfield force we were once used to.

Looks like he’s lost at least a yard of pace.

Context is key with Jones, who made his first start of the season and having only played half an hour of football due to injury. He was nowhere near being fit to start (and play 90 minutes) but Thiago‘s late withdrawal forced Klopp’s hand.

Arguably not enough guile on show in midfield and a lack of dynamism off the ball also evident.

Would be harsh to be too critical, though, given his lack of playing time.

Covered the most distance than any other Liverpool player and completed 90 minutes, fair play to him on a first start of the season and in an unfamiliar role too.

Admittedly, he was the star of a bad bunch, but it is still so encouraging to see a teenager standout out so much for a club of the Reds’ stature.

Nearly got an early assist after an inch-perfect pass to Carvalho.

Salah will have been eyeing this as fixture to continue his return to goalscoring form, but he cut a frustrated, isolated figure.

The Egyptian was given poor service throughout and also took a knock that looked serious at one point, with a tame effort on goal the best he could hope for.

This was back to the ineffective days of earlier in the season for Salah.

With so few options, the youngster was again trusted by Klopp, but like so many, he flittered in and out of action when more was required.

He almost opened the scoring after a wonderful first touch, but was denied by Dean Henderson, and his influence diminished from then on.

Deservedly substituted midway through the second half. He struggles to make an impact on games.

Firmino has been largely excellent this season, but this was a curiously muted showing from him.

Like so many, the Brazilian just never got going at any point, overhitting passes and lacking legs, heading wide at one point.

Maybe a lot of football recently is catching up with him.

Tested Henderson with a header and provided more creativity than anyone else on the pitch.

Kept things largely simple, but not enough when you need a goal or two.

Nice to see him back – but that he was even on the pitch shows how depleted the squad is.

Klopp must be tearing his hair out with what he’s seeing this season.

This was a Liverpool performance that we have seen too often in recent months, with no intensity on show and sloppiness in possession.

The manager has to shoulder a fair chunk of the blame, failing to get even an adequate display out of his team and not kicking on after such a promising return to form.

Next up is Ajax, with massive improvements required. Thankfully he should have Ibrahima Konate, Thiago and Darwin Nunez back.