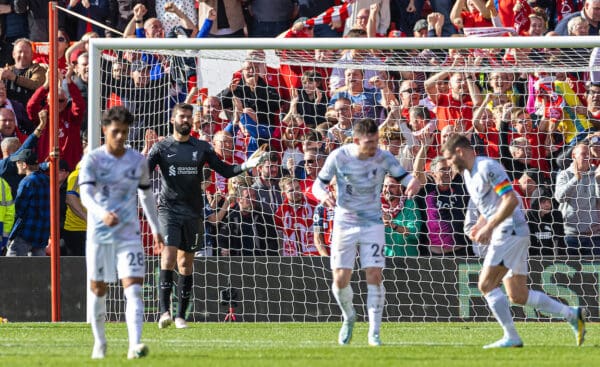 A dismal performance and a shocking result, Liverpool losing 1-0 to bottom of the league Nottingham Forest.

It was another five changes and a patched-up XI for the Reds, seeking three consecutive league wins for the first time this season.

With Thiago having been planned to start but ruled out at the last minute due to an ear infection, Curtis Jones made his first start of the season, having only played 30 minutes all campaign to date.

Meanwhile, Darwin Nunez was left out due to muscle soreness, meaning Mo Salah and Roberto Firmino were the only fit forwards.

The best chance of the first half fell for Virgil van Dijk, but the centre-back somehow guided his header wide six yards out.

Harvey Elliott was by far the Reds’ best player and he played a superb ball for Fabio Carvalho early on that was beautifully controlled but couldn’t be finished.

The home side took the lead 10 minutes into the second half, with Taiwo Awoniyi following up a rebound off the post from a set-piece that Joe Gomez had given away near the halfway line.

It was poor defending and it was almost 2-0 minutes later, but for James Milner making a superb block to deny Morgan Gibbs-White.

Jurgen Klopp introduced Jordan Henderson and Trent Alexander-Arnold, but with forward options non-existent, it was Alex Oxlade-Chamberlain who replaced Firmino for the final 15 minutes.

It was Oxlade’s first minutes of the season, playing up front when losing a game, which sums up Liverpool’s situation.

Liverpool barely threatened, offering no attacking quality, but did get Alexander-Arnold in for a header which was saved by Dean Henderson.

It was Alisson who made the next big save with five minutes to go, superbly stopping Yates’ effort. That the Reds’ goalkeeper was their best player in a defeat to the bottom-of-the-table team sums it all up.

Van Dijk, again, had the best chance, completely unmarked off a corner in stoppage time but headed straight at the ‘keeper.

The wait for an away league win this season goes on. Defeat to Forest, six days after beating Man City. Shocking.

Next Match: Ajax (away, Wednesday 23 October)