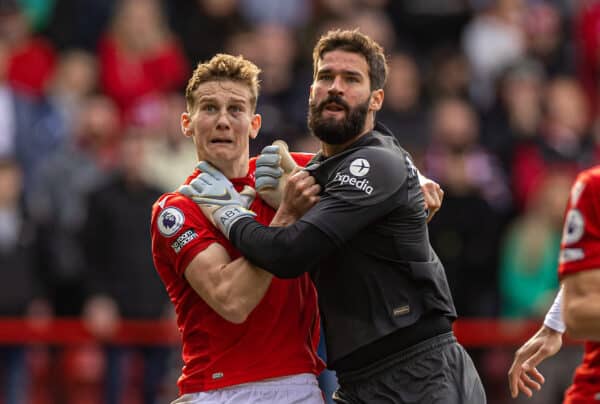 There were abject Liverpool performances everywhere you looked, as they slumped to an awful 1-0 loss to Nottingham Forest.

The Reds were looking for a third consecutive league win for the first time this season, but instead they were defeated by the bottom-of-the-table side and left still without an away win in the league this season.

Former striker Taiwo Awoniyi‘s first-half strike secured the victory for Forest, with Jurgen Klopp‘s men flat from the first minute to the last.

It was Fabinho (4.6) who got the lowest rating for Liverpool, as his hugely worrying dropoff continues.

The Brazilian looks a million miles from the player he once was and he offered nowhere near enough dynamism and quality at the City Ground.

Ian Doyle of the Echo simply asked “what has happened to him?” when assessing Fabinho – it’s hard to point out why he has dipped so much.

The second-worst player was Joe Gomez (4.9), who was fortunate not to get the poorest average after a dire showing.

TIA’s Henry Jackson described him as “he’s easily fourth-choice” in the centre-back pecking order, which doesn’t bode well in the long term.

Only 55 percent of Gomez’s long balls were accurate, accoring to FotMob, which summed up his afternoon.

Jackson feels he has “lost at least a yard of pace,” no longer covering the ground like he used to.

Next up was Fabio Carvalho (5.0), who had one early chance but then faded, with Doyle saying he “flitted in and out of the game.”

Alisson (7.7) now has three highest averages in a row and he was virtually the only plus point on Saturday.

Liverpool’s next game sees them make the trip to Ajax in Champions League on Wednesday night (8pm UK).