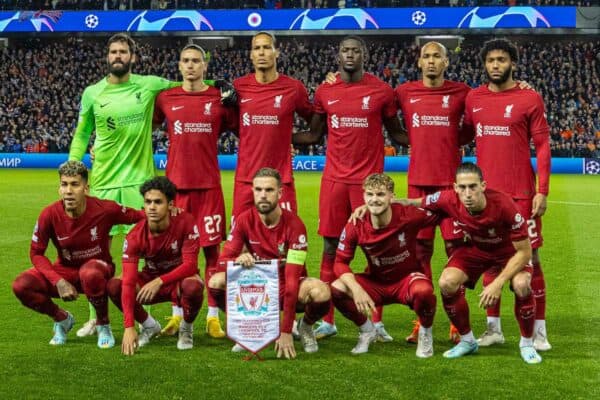 Rangers 1-7 Liverpool: Player Ratings – What the media and statistics say

There were some superb individual performances in Liverpool’s 7-1 annihilation of Rangers, with Roberto Firmino the star man.

The Reds faced a big Champions League game on Wednesday evening, with anything other than a win at Ibrox not good enough.

Having gone in 1-1 at half-time, Jurgen Klopp‘s men produced a ruthless second-half display, with substitute Mohamed Salah scoring a hat-trick and Firmino bagging a brace.

It was a feel-good occasion after a terrible run of form, with Liverpool now hopefully on the mend.

There was no dispute over who the Reds’ star player was at Ibrox, with Firmino (9.3) putting in a superlative showing.

The Brazilian has looked past his best for an extended period of time, but has really does look a revitalised figure at the moment.

Ian Doyle of the Echo felt Firmino took both of his goals “brilliantly” on the night, as he took his tally to eight for the season.

In second place was Harvey Elliott (8.2), who was a classy presence on the right wing, also getting a goal for good measure.

Doyle lauded the 19-year-old, saying he “really came into his own” during the second half, as he bagged his maiden Champions League strike.

Ibrahima Konate (7.5) completed the top three, returning to the starting lineup with an imperious outing.

The Frenchman made four clearances and headed clearances apiece, as pointed out by FotMob, while Jackson said he was Liverpool’s “standout defender.”

Kostas Tsimikas (6.6) and Jordan Henderson (6.6) were the lowest-rated players, with Doyle admitting that the former had a “tough time” up against Fashion Sakala.

Liverpool’s next game is the toughest assignment imaginable right now, as Man City head to Anfield in the Premier League on Sunday (4.30pm UK).