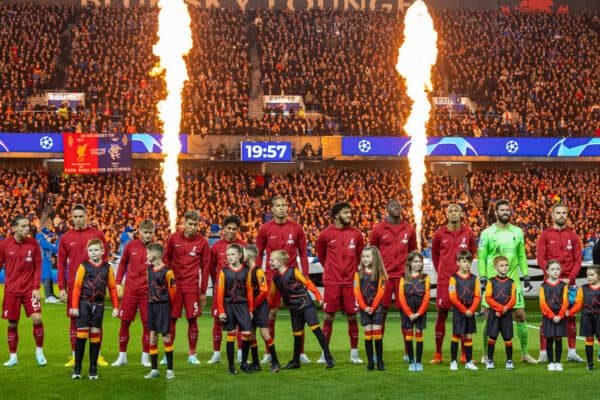 Liverpool picked up an emphatic, confidence-boosting 7-1 win at Rangers in the Champions League, with Roberto Firmino magnificent for the Reds.

Alisson‘s form hasn’t been in question of late, unlike so many, and he was again solid on Wednesday evening.

The Brazilian could do nothing about Scott Arfield’s well-taken opener, and his handling and distribution were strong throughout.

With Trent Alexander-Arnold injured, Gomez’s inclusion at right-back was a no-brainer.

It wasn’t necessarily a stellar showing from the 25-year-old, who almost gave Rangers a chance was a bad backpass, and his defending was sometimes sloppy.

He then produced an assist that Trent would have been proud of, finding Firimino in inch-perfect fashion with a low ball behind the defence. Gained confidence, like many of his teammates.

Konate made his first start of the season, making a timely return from injury just as Joel Matip picked up an issue of his own.

He was Liverpool’s standout defender on the night, biting into tackles and using his physicality impressively, proving to be a plus point.

Should start against Man City, even if Matip were fit.

Van Dijk has been very poor by his high standards this season, but he was largely untested against a limited home side.

He ignored the boos from the Rangers fans in typically laid-back fashion and did what was asked of him without really breaking a sweat.

Still not the absolutely faultless figure he was, but sometimes we can judge him too harshly.

Tsimikas started again, despite Andy Robertson returning to the squad, but this was a hit-and-miss performance from him.

Fashion Sakala looked to have the beating of him at almost every opportunity out wide, with the Greek looking horribly susceptible.

Did get an assist for Roberto Firmino‘s equaliser, though, swinging in a precise corner. But his deliveries (and one free-kick) were often off target.

Expect Robertson to start on Sunday.

Fabinho was another who returned to the starting lineup, with Liverpool badly in need of him returning to his brilliant best.

He again looked short of that, though, running through treacle and failing to tracker runners numerous times.

The Brazilian may only be 28, but he looks 38 at the moment. Although, he – like most – was much better in the second half when Liverpool’s quality shone through against an inferior opponent.

Henderson is one of many who has been way below what we expect from him and he was under big pressure to perform.

Like Fabinho, he was up-and-down, switching off completely to allow Arfield to open the scoring, and not offering any guile in possession.

Things got easier after the break and he was also a lot better.

Elliott’s minutes have diminished in recent games since the change in formation, but he started at Ibrox and put in an eye-catching and effective performance.

Playing out on the right, the teenager looked like creating a spark, running with the ball and looking to make key passes.

Completed an impressive evening by rounding off the scoring with his first European goal.

Carvalho was handed a rare start as Jurgen Klopp switched things up after not wanting to risk Diogo Jota.

As has been the case with most of Carvalho’s displays this season, he found himself on the periphery of the action, firing one shot wide.

He is extremely young and is still maturing, so any overly harsh judgment would be unhelpful, but so far hasn’t really shown enough, albeit in a team that’s struggling.

Fun Bobby is most certainly back!

You wonder where Liverpool would be without the 30-year-old currently, as he buried his seventh and eighth goals in 11 games this season.

His all-round game was largely brilliant, too, and his rabona assist for Darwin Nunez was outrageous.

Bobby now has six braces in the Champions League – it’s good to see that smile again!

Nunez led the line as he looks to find some rhythm in his Liverpool career and it was ultimately a good night for him, scoring in consecutive games for the first time for the Reds.

There was plenty of willing running and clever movement, and while his final ball let him down at times, he took his goal brilliantly.

Is looking better than he did a few weeks ago, which is a massive positive.

Great to see him back, more than anything! Important minutes if he’s to start on Sunday vs. City.

Was seemingly on a mission to get a yellow card, the mad bastard!

An absolutely ruthless hat-trick from nowhere – the quickest in Champions League history! What a stunning footballer he is. Never doubt him.

That should do him the world of good. We all needed that confidence boost.

Was lively and involed as the goals flew in – but none for him since April and he missed a sitter, which Elliott then finished.

Fairly unnoticeable at right-back. Hopefully not needed on Sunday there!

This was a massive evening for Klopp, who cut a perplexed and tired-looking figure after Sunday’s defeat at Arsenal.

What a night it was for the German, who was beaming at the final whistle and must feel so much better, getting a dominant performance out of his team.

It shouldn’t disguise what was an average first-half showing, however, with the midfield’s lack of legs still an issue.

On to Man City, which will tell us if Liverpool have turned a corner or not.