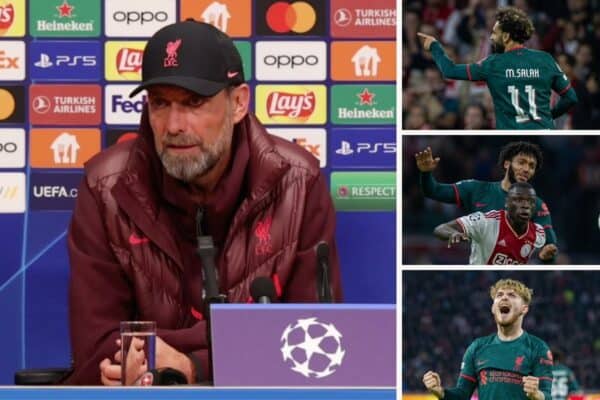 Jurgen Klopp gave a tactical insight and relished Champions League progress after Liverpool’s comfortable 3-0 victory over Ajax in Group A.

There was concern midway through the second half when Jordan Henderson required treatment after a clash of knees, with the captain clearly in pain.

Henderson was brought off immediately and headed down the tunnel, leading to concerns over yet another injury for Liverpool, but Klopp has allayed fears.

“I was worried as well, when I saw the situation, because it was in front of me,” he admitted.

“I think he got knee on knee, so painful, a bruise probably, really painful.

“But as far as I know now, nothing else, so that should be fine.”

On the rest of the squad, Klopp added: “I didn’t have too much time to spend in the dressing room yet, but nobody came to me with any bigger problems.”

After weeks of a more orthodox 4-4-2, Liverpool took to the field in a 4-4-2 diamond setup, with Roberto Firmino behind Mohamed Salah and Darwin Nunez in attack.

It was a surprise, and the Reds took time to adjust, but there was a clear plan in place.

“We could have lined up today with the 4-3-3, but we decided more for a diamond,” Klopp reflected.

“The difference is, obviously, in possession, not that big, but it keeps the strikers a bit more inside.

“So we have no clear wingers, the wings open up for the full-backs and all these kinds of things.

“That’s nothing new, but you have to be really brave on the No. 8 positions and on the full-back positions.”

After the horrorshow at Nottingham Forest days previous, it looked set to be another familiar display from Liverpool as Ajax enjoyed a host of chances early on.

They were unable to convert them, however, and Liverpool soon took charge, with Klopp pinpointing the moment it all changed for his side.

“The man-marking system of Ajax is uncomfortable,” he said.

“It just seems we should have turned in a lot of moments in midfield and realised immediately that we are not constantly under pressure.

“The last line was very important.

“Virg and Joey, in the moment they started stepping in – and you might remember the first game when we played Ajax and Joel was constantly super-active there – Ajax were in doubt.

“Because now they had to mark a different player, leave another player free and all of a sudden you constantly find a player you can play with.

“We just needed time to do that again and, when we did it, then we controlled the game and had brilliant moments actually.”

Just happy to progress, but…

With three points at the Johann Cruyff ArenA, Liverpool guaranteed their place in the last 16, hitting the target set out for them before the flight to the Netherlands.

“Today, I would have been over the moon if we played here today 0-0 and got through,” Klopp claimed.

“It’s all about getting through.”

Not only did Liverpool get through, though, but they served up a display that could boost confidence again after a blow at the weekend.

“The first goal, the overview of Hendo was exceptional, the second goal was a great cross and Darwin takes on pretty much everybody, then Harvey crowned his really good performance with a sensational finish.

“That’s all individually very helpful, and for the group as well. That’s why we are really happy in the moment.”