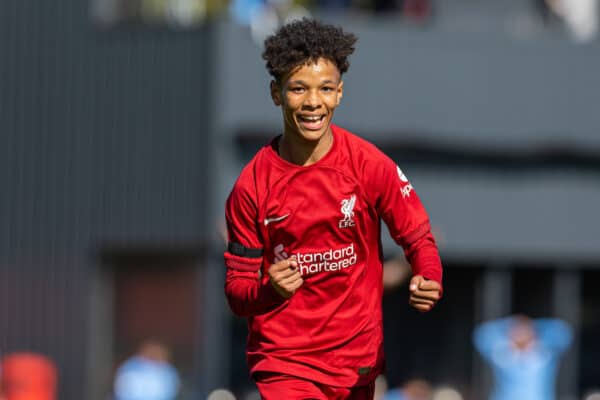 It was a come-from-behind 2-1 victory for the Liverpool under-18s at Blackburn after following in the footsteps of Jurgen Klopp‘s side by conceding first.

Marc Bridge-Wilkinson named four players in his XI who featured in the midweek UEFA Youth League victory on Wednesday, a well-timed confidence booster after an 8-1 defeat only days prior.

But Ben Doak, who was on hand to score a wondergoal to clinch the win at Rangers, was not one of the names, perhaps with a spot in the under-21s side on Tuesday in mind.

Like Klopp’s first team, the young Reds conceded first inside four minutes as Blackburn’s Harley O’Grady Macke made sure to punish Liverpool on the rebound after failing to clear their lines.

The two teams traded blows from there and it was not until the 33rd minute that Liverpool got back on level terms through 16-year-old Trent Kone-Doherty.

Lewis Koumas provided the assist as Kone-Doherty cut in-field to convert from outside of the penalty area for his fourth goal of the season.

The Reds didn’t waste any time after the break with Bridge-Wilkinson’s side taking the lead six minutes after play resumed, one they held onto until the end of the 90 minutes.

Ranel Young was responsible with his first goal of the season, driving into the area and finishing beyond William Blease in Blackburn’s goal.

Liverpool were asked a number of questions in response and the match finished with a few flashpoints, namely the sending off of Blackburn centre-back Charlie Olson after two yellow cards.

Fabian Mrozek still had to make a timely save at the death to keep his side in the lead, with the offside flag then denying what Blackburn believed to be a late equaliser.