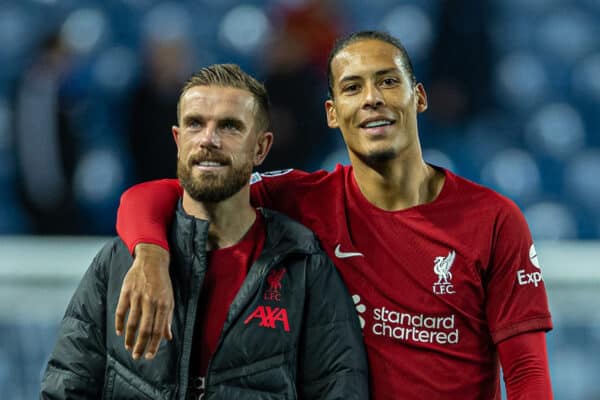 Liverpool’s 7-1 victory over Rangers left Virgil van Dijk “buzzing” after the game, with the Dutchman urging the club’s “real fans” to get behind the team ahead of Sunday’s clash with Man City.

Van Dijk played the full 90 minutes as the Reds came from behind to hit seven at Ibrox on Wednesday, with Mohamed Salah setting the record for the fastest-ever Champions League hat-trick.

The result was the perfect remedy for a team that has been lacking in confidence in recent weeks, especially with an Anfield meeting with Premier League champions City on the horizon.

Liverpool’s No.4 says their performance left him in good spirits after the game, while adding that the players and fans will need to be at their best again if they are to stand a chance against Pep Guardiola’s side.

“I think it gives us a lift,” he told LFCTV when asked if the result had given the players a confidence boost.

“The thing is, it doesn’t guarantee anything for Sunday, but it’s much better than losing or drawing here, for example. Especially when everyone expects you to win.

“So I think it was a great performance overall, under the circumstances especially.

“I’m buzzing. I’m buzzing about the result, the performance, especially second half, and now it’s time to recover and get ready for a special one on Sunday, where we need each and every one of us to be at our best.

“We need the fans also with us, especially in difficult moments, but I know the real fans are always going to be there for us.”

Van Dijk insists the Reds are looking forward to the visit of City, despite the two sides’ contrasting form in the Premier League.

The last meeting between the teams saw Liverpool crowned Community Shield winners at the end of July, and Van Dijk singled out Erling Haaland and Kevin De Bruyne as two players he’s looking forward to challenging himself against this weekend.

“It sounds cliché, but these are the games you want to play,” he added.

“You’re playing against the champions, one of the best teams in Europe, with probably the most in form striker, with one of the best midfielders in the world in my opinion.

“They have a great side, a great manager. It’s always been tough for both sides and it’s not going to be anything different.

“So we should look forward to it, and this will definitely give a little boost to all of us that we can be very, very good.”