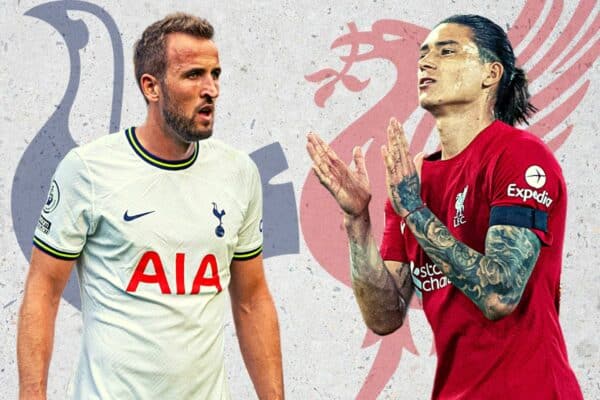 10 key things to know ahead of Tottenham vs. Liverpool

Liverpool’s penultimate Premier League game before the break for the World Cup will see them take on Antonio Conte’s Tottenham in London on Sunday, with the Reds desperately in need of a positive result.

Liverpool’s consistent results in the Champions League are yet to translate to their domestic campaign, with just four wins registered from their opening 12 league matches.

Their two most recent Premier League results saw them beaten by the teams positioned 20th and 19th in the table, despite an impressive victory over champions Man City beforehand.

Liverpool need points, and they need them sooner rather than later if they have any aspirations of achieving anything in the Premier League this season.

Victory against a Tottenham side who are currently third in the table would be a good place to start. Here are 10 key things to know ahead of what is possibly Liverpool’s biggest game of the season so far.

1. Last away day before Christmas

The mid-season break for the World Cup is edging ever closer.

Wednesday’s League Cup tie at home to Derby is sandwiched in-between Liverpool’s final two league games before the tournament, with next Saturday’s Anfield clash with Southampton their final match for six weeks.

This, then, is the Reds’ last away trip before the break.

A look at the history books will tell you it may not be the worse destination for such a game, with Liverpool yet to lose in their three trips to the Tottenham Hotspur Stadium.

2. Nothing to separate Klopp and Conte

Six matches. One win, one defeat and four draws.

That’s Klopp’s record up against Conte to date.

Last season, the teams shared the points in both league games, with a 2-2 draw in north London just before Christmas, and a 1-1 draw at Anfield in May. Remember that Luis Diaz strike in front of the Kop?

Klopp and Conte’s contrasting styles of play always make for an interesting spectacle, and we wouldn’t expect anything less this weekend.

3. 10 points between the sides

At this stage, many Liverpool supporters would probably accept a top four finish at the end of the season, with any title aspirations slowly but surely slipping away.

But if the Reds don’t get their act together sooner rather than later, even that more realistic target will become a huge struggle.

Heading into this game, Tottenham already sit 10 points ahead of Liverpool in the table, although the Reds have played a game less.

After consecutive league defeats against Newcastle and Man United, Conte’s side returned to winning ways with a 3-2 comeback win at Bournemouth last weekend.

The Reds simply can’t allow that gap to get any bigger.

4. Son one of several Spurs injuries

Son Heung-min will miss this game after Tottenham confirmed he will undergo surgery on the fractured eye socket he sustained against Marseille on Tuesday.

Richarlison is also unavailable, and despite being involved in parts of Friday’s training session, Dejan Kulusevski remains a doubt, having been sidelined since September.

Defender Cristian Romero is unlikely to be fit, while Conte said on Friday that he had asked Lucas Moura to “try to be available” despite tendon pain.

Aside from Harry Kane, Conte has a limited amount of attacking options at his disposal, with Moura possibly the likeliest to partner the England captain in a 3-5-2 formation.

Speaking in Friday’s pre-match press conference, Klopp revealed that Henderson will be available having missed the win over Napoli as a precaution.

Milner, however, will miss out, meaning his 600th Premier League appearance will have to wait. The Liverpool vice-captain is following the concussion protocol after coming off with a nasty bang to the head on Tuesday night.

Klopp says he’ll return to full contact training on Tuesday, but this game will come too soon.

Time will tell, but given the Reds’ improved performance against Luciano Spalletti’s side, it seems likely that Klopp will stick with the same system for this one.

With five days between the two games, Ibrahima Konate should be able to start alongside Virgil van Dijk at centre-back, while Andy Robertson should come back in for Kostas Tsimikas.

Fabinho, Henderson and Thiago could all start together in midfield, with a front three of Mo Salah, Darwin Nunez and Roberto Firmino.

Here, we look at two ways the Reds could line up on Sunday.

Wholesale changes could be made in next Wednesday’s League Cup tie with Derby.

Some interesting stuff on Fabinho‘s recent form, with the boss encouraged by the Brazilian’s outing vs. Napoli.

“The game was a clear sign of Fabinho how we know him.

“It was a good game. We defended, in all positions, on a different level to the week before. Yes, it was good.

“It felt good, for him it was very important to realise that was possible as well, and that was a good start in the right direction.”

Liverpool are yet to win a Premier League away game this season.

The last time they went six away league games at the start of a season without winning was in 2006-07.

The Reds are unbeaten in their last nine league meetings against Tottenham, and 10 games including the 2019 Champions League final.

As mentioned previously, they are yet to lose a game at the Tottenham Hotspur Stadium, winning both of the games there before last season’s 2-2 draw.

Liverpool are also one win away from recording a 250th win in all competitions under Jurgen Klopp in his 401st game.

9. Madley in the middle

This will be the third time Andy Madley has taken charge of a Liverpool game this season, after he oversaw the opening day share of the points at Fulham and the 3-3 draw with Brighton.

Remarkably, he has only ever refereed one Tottenham game, a 1-0 victory at West Brom two years ago.

His most recent game was Brighton‘s 4-1 win over Chelsea last weekend, while he is yet to issue a red card this season.

Tottenham vs Liverpool will be shown live on Sky Sports Main Event and Sky Sports Premier League in the UK, with kickoff set for 4.30pm (BST).

If you’re unable to watch, Sam Millne will be keeping you up to date on This Is Anfield’s live blog on the day, with full updates from 3.45pm.